No House Limit, by Steve Fisher 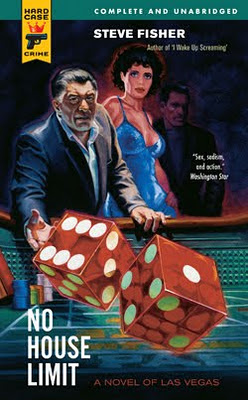 Steve Fisher was an amazingly prolific author, his output totaling around a hundred novels, 900 short stories and 120 movie and television scripts. His best-known crime novel was probably I Wake Up Screaming. His 1958 novel No House Limit was subtitled A Novel of Las Vegas and is perhaps the ultimate gambling novel.

Joe Martin owns and runs the Rainbow’s End casino in Las Vegas, one of the biggest casinos in the city. It’s a completely independent operation, not associated with any crime or gambling syndicates. Since the days when mobsters like Bugsy Siegel established the city as a gambling centre the Las Vegas syndicate had been trying to clean up its act. They wanted to avoid anything that would scare off the customers. That meant no gangland-style killings. If Joe Martin refused to join the syndicate that was his business. There was more than enough money to go around and they were content to leave him alone.

Now someone is targeting Joe Martin. He has his sources and he knows the attack is coming but he has no idea who is behind it. He does know what the weapon will be though. It will be Bello, the world’s most famous professional gambler. Whoever is out to get Joe has provided Bello with a $400,000 stake. The objective is to wipe out Joe Martin at the crap tables, to take everything he has including the casino. And if anyone can do it, Bello can.

Joe Martin is not going to be a pushover though. You don’t survive for a decade as one of the major casino operators in Vegas without knowing a thing or two about survival. Joe is no criminal, his operations are strictly legitimate, but he’s still one very tough guy and he has the reputation of having the proverbial nerves of steel.

Joe has other things on his mind at this time. Well one thing in particular - a girl called Sunny Guido. No-one really knows much about her. She just turned up at the casino but she’s obviously pretty interested in Joe Martin. And he’s rather interested in her as well. He’s the kind of guy who has always prided himself on not needing anyone, especially women, but Sunny is different. To his own amazement he finds that he is falling for her. Maybe it’s just the pressure. And that pressure gets pretty intense after two days of non-stop action at the crap tables have seen Joe lose $2 million to Bello. At the moment he’s in need of emotional support. But maybe it’s more than that.

The Rainbow’s End is being targeted in other ways as well - counterfeit gambling chips, loaded dice, betrayals by employees. It’s all part of a concerted plan to break Joe Martin.

Bello is not without his weaknesses as well. His girlfriend Dee is getting restless and she’s making a play for Mal Davis, a lounge singer and piano player at the Rainbow’s End and an old friend of Joe’s. Bello has the reputation of being a man who doesn’t like to lose at anything and Mal knows that stealing his girl could get him killed.

Fisher builds the tension remorselessly as fortunes ebb and flow in the epic gambling battle that will decide the fate of Joe Martin. Fisher was a keen gambler himself and displays his encyclopedic knowledge of the world of the high rollers. The book has a heady atmosphere of dangerous glamour mixed with desperation.

The character of Bello was based on a real-life gambler, the legendary Nick the Greek - a man reputed to have won and lost $500 million at the gambling tables.

No House Limit has been reissued by Hard Case Crime and is highly recommended.
Posted by dfordoom at 2:24 PM