Omega: The Last Days of the World, by Camille Flammarion 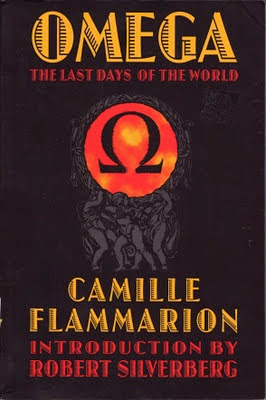 Camille Flammarion (1842-1925) was a French astronomer and a noted populariser of science. He also wrote a number of science fiction novels, including Omega: The Last Days of the World.

Published in 1893, it’s a rather unconventional work and it’s debatable whether it can really be considered a novel. It’s more of a fictionalised speculative essay.

It opens with the world about to end. It is the 25th century and a comet is on a collision course with the Earth. Most scientists initially agree that the results will be catastrophic and will almost certainly lead to the extinction of all life on the planet. Later dissenting voices are raised and at an international conference a panel of scientists explain their varying theories on how the Earth really will die, several million years in the future.

The predictions of doom turn out to be false. The book then changes gears abruptly and traces the future history of mankind, with civilisation and technology progressing and our species continuing to evolve towards greater and greater intelligence. Then, after a few million years, with the Earth’s water having disappeared and with the planet becoming more and more uniform as mountain ranges vanish and only an endless unbroken plain remains, civilisation starts to decay.

As always when scientists try to predict the future Flammarion gets almost everything wrong. On the other hand you have to admire the truly epic sweep of this book, something that had not really been attempted in science fiction prior to this time.

As well as being a future history it’s also a utopian vision although like most utopias it could be seen by sceptics as a dystopia if you don’t share Flammarion’s naïve faith in world government or his enthusiasm for a single global monoculture.

It’s a bold attempt to present scientific ideas in the form of fiction but I’m not sure it really succeeds. Having no characters to relate to added to the sheer scale of the time period it covers makes it difficult to engage with the story so it doesn’t really work as fiction.

Flammarion’s passion for science was matched by his enthusiasm for spiritism and related mystical beliefs and the combination is a little disconcerting.

An interesting historical curiosity, certainly worth reading if you’re fascinated by the history of the science fiction genre.
Posted by dfordoom at 3:05 AM