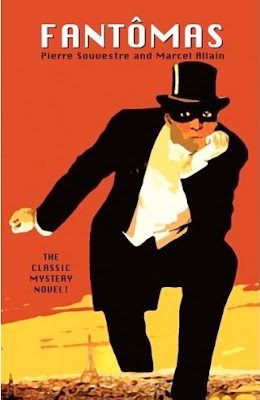 The arch-criminal Fantômas made his first appearance in print in 1911. Fantômas, written by Marcel Allain and Pierre Souvestre, was followed by no less than 42 sequels.

There had been very successful literary criminal heroes before this, most notably Maurice Leblanc’s Arsène Lupin in France and E. W. Hornung’s Raffles in Britain. They were gentlemen thieves, and always remained gentlemen. They avoided unnecessary violence and they had their own sense of fair play. Fantômas belonged to a very different breed. Horrifyingly ruthless and utterly selfish, Fantômas had no hesitation in committing the most cold-blooded murders. He had no real redeeming qualities. He was a very modern sort of amti-hero, of the kind that was to become depressingly ubiquitous from the 1960s onwards. But when Allain and Souvestre created the character he represented something genuinely new and fresh.

Fantômas is also a particularly shadowy anti-hero/villain. For much of the first novel he is no more than a menacing presence in the background. The hero of the piece is the master detective Juve who has dedicated his life to bringing Fantômas to justice. It’s an exceptionally difficult task since many in the police force refuse to believe that Fantômas even exists.

The novel has a very episodic structure. There is a murder of a wealthy elderly noblewoman, the disappearance of an English lord, a daring jewel robbery in a hotel. There are no clear links between any of these crimes, but Juve has developed the ability to spot the Fantômas touch in apparently random and unconnected crimes.

The writing is pulpy and rather clunky and the pacing is very uneven. Despite these faults the sinister quality of Fantômas himself and the sheer scale of his villainy make this a worthwhile read. And for anyone with an interest in the history of crime fiction and of pulp literature it’s essential reading.

Louis Feuillade’s 1913 Fantômas movie serial was just as influential as Allain and Souvestre’s novels and it still exists and is available on DVD.

John Ashbery’s 1986 translation was issued in paperback by Picador and copies can still be found in used bookstores. English translations of quite a few of the Fantômas novels are available from print-on-demand publishers.
Posted by dfordoom at 4:58 AM