The Vampire and the Devil’s Son, by Ponson du Terrail 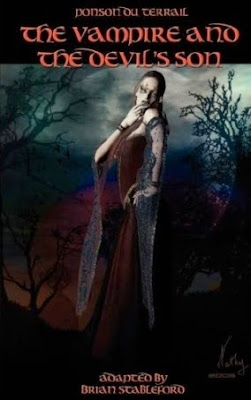 Pierre-Alexis Ponson du Terrail enjoyed immense popularity in mid-19th century France. This was the great age of the romans feuilletons, potboilers published in serial form. Rocambole was his best-known work. The Vampire and the Devil’s Son (La Baronne trépassée) which appeared in book form in 1852 is of exceptional interest.

The romans feuilletons followed a definite formula, combining melodrama, sensation and romance. Plot coherence or realism were not essential and these were qualities that Ponson largely ignored. As long as they provided thrills and entertainment no-one was going to complain that the stories made little sense.

The Vampire and the Devil’s Son follows the misadventures of the Baron de Nossac. He is a typical nobleman of his time - brave, dissolute, feckless and charming. And in 1723, as this tale commences, more than a little financially embarrassed. He is awaiting confirmation of his appointment as governor of Brittany, but as that seems likely to fall though he decides it might be wise to find himself a rich wife. The daughter of a wealthy tax-farmer seems a suitable choice. To his surprise he finds that she’s not only rich but also rather charming, the sort of woman with whom he could easily fall in love. As we soon discover, de Nossac has a remarkable propensity for falling in love

There is however a complication. The Baron’s mistress has extracted from an unusual promise, and being a gentleman he must keep this promise. He must agree to be her save for a period of 24 hours, at any tome of her choosing. It is particularly unfortunate that the time she dies choose is his wedding night. Very unfortunate indeed - his bride is so upset she leaves his chateau in the middle of the night, catches a chill and dies.

The Baron’s adventures now take a veery strange turn indeed. He encounters the mysterious Black Huntsman, who claims to be nothing less than the son of the Devil himself. And he encounters Gretchen, a woman who resembles his dead wife to an uncanny degree, and who proves to be a vampire. But there are many many plot twists still to come, his late wife proves to have more than one double, many of the characters he encounters are not at all who they appear to be, and de Nossac begins to seriously doubt his own sanity.

Ponson du Terrail was very much influenced by the gothic fictions of Ann Radcliffe but this is gothic with added weird hallucinatory qualities.

Translator Brian Stableford proves both an introduction and an afterword to the Black Coat Press edition and makes some extremely interesting observations in this odd novel. He points out that the author was to some degree constrained by the conventions of the gothic as well as the more general literary convention of his day, and suggests that a modern reader might well interpret the story quite differently as compared to a reader in 1852. Stableford sees the author as being on the verge of several innovative breakthroughs, but being unable to carry them through in a complete manner.

A strange but highly diverting little tale, with some genuinely macabre moments. One of the many forgotten treasures of 19th century French gothic. Highly recommended.
Posted by dfordoom at 11:45 PM