The Case of the Perjured Parrot, by Erle Stanley Gardner 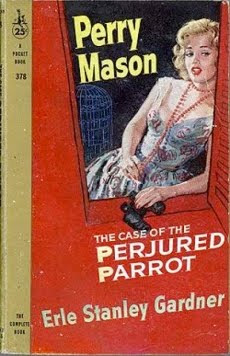 The Case of the Perjured Parrot is my first sampling of Erle Stanley Gardner’s Perry Mason novels. And it’s a pretty enjoyable read.

This one was originally published in 1939. It has the kind of outrageous and unlikely but highly ingenious plot you expect from a golden age crime mystery. There’s zero characterisation and atmosphere. Everything depends on the plot, but that’s the nature of this type of mystery and the plot is clever enough to keep things entertaining.

A millionaire businessman is found murdered in his mountain cabin, shot at close range with both barrels of a vintage derringer. There’s no shortage of suspects. There’s his wife, from whom he may or may not actually be divorced. There’s his feckless stepson. And there’s his girlfriend, who may actually be his wife.

And there really is a parrot, and the parrot really does commit perjury!

This is crime fiction with an emphasis on breezy fun. You’re not expected to take things overly seriously.

I enjoyed it enough that I’l be keeping a lookout for more of the Perry Mason books.
Posted by dfordoom at 3:41 AM