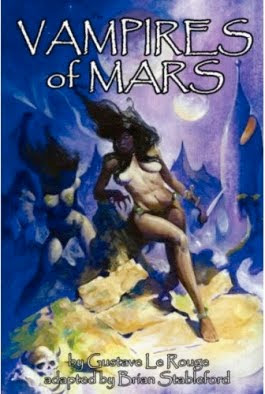 The scientific romance was a genre that thrived in both Britain in France from the time of Jules Verne up until roughly the 1920s. It produced some wonderfully strange books, and Gustave Le Rouge’s Vampires of Mars might well be the strangest of them all. It’s also possibly the only decadent scientific romance.

The scientific romance was essentially science fiction but the science was often rather fanciful (sometimes extremely fanciful) and the emphasis was more on adventure and on speculation about the future of society and of our species rather than on the science.

The writers of these tales came up with some delightfully outlandish methods of interplanetary travel everything from giant cannons to balloons, but Vampires of Mars really excels itself in this respect. Our interplanetary voyager reaches Mars through the power of the will. Or through the power of many wills. The minds of thousands of Hindu fakirs are harnessed by a device invented by a charismatic brahmin and a French engineer named Robert Darvell. The device temporarily stores the volitional fluid thus generated and this volitional fluid produces enough power to send a metal capsule to Mars at the speed of thought (which as everyone knows is approximately half the speed of light).

Upon reaching Mars Darvell encounters several intelligent species, each new species that he encounters proving to be even more bizarre than the previous one. The inhabitants of Mars include gigantic vampire bats with near-human intelligence and even more intelligent invisible vampires.

Darvell’s biggest problem though is how to get back to his home planet. Fortunately his friends on Earth are working on finding other means of inter-planetary travel. These friends include a British officer in the Indian army, a Polish scientist, an English naturalist and a fabulously wealthy heiress (who happens to be also young and beautiful and in love with Darvell). The narrative jumps back and forth between their feverish efforts to organise a rescue mission and Darvell’s adventures on Mars (where he becomes a virtual king).

Le Rouge was certainly inventive and he keeps the action moving along as well. In keeping with the standard practice of authors of the French pulp fictions or romans feuilletons of that era he composed his works extremely rapidly and probably much of it was dictated, and to revise anything or to worry about consistency or continuity would have been a gesture of defeat. As a result the plot is often confusing and contradictory but it doesn’t really matter.

What made Le Rouge unusual among authors of this genre was that he was closely involved with the literary Decadence of the late 19th century. Translator Brian Stableford provides his usual informative and thought-provoking afterword and suggests an interesting reading of the book as a kind of satire on its own genre and on colonialism.

Vampires of Mars was originally published as two books, Le prisonnier de la planète Mars (1908) and La guerre des vampires (1909). If you have a taste for literary oddities and you enjoy the idea of a romance that combines science, mysticism and the occult then it’s certainly worth picking up a copy of the Black Coat Press edition.
Posted by dfordoom at 10:08 PM