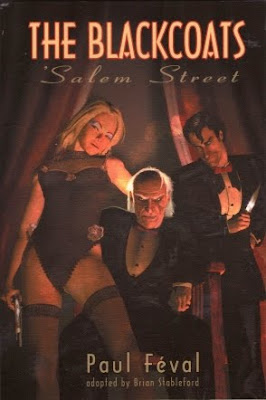 Paul Féval (1816-1887) was a popular and prolific French novelist who dabbbled in a variety of genres from swashbuckling adventure to gothic horror to crime. His masterwork was the Habits Noirs or Blackcoats cycle, a series of novel dealing with an immense and sinister secret criminal brotherhood. La Rue de Jérusalem (translated by Brian Stableford under the title 'Salem Street) marked the official beginning of this cycle although Féval linked several earlier novels into the series.

Like most of Féval’s works the novel was originally published in serial form, in 1868. As you’d expect from a serial novel it’s a somewhat ramshackle construction with numerous sub-plots and endless complications. Like most authors of these romans-feuilletins Féval wrote quickly, had no interest in revising, and often dictated his books. As a result there are inconsistencies and continuity errors, but they’re part of the charm of this sort of fiction.

To attempt anything approaching a plot synopsis would be a daunting task. There are kidnappings, murders, fortune-hunters, a pretender to the French throne, cases of mistaken identity, old sins that return to haunt both victim and perpetrator, police spies, duels, brawls, betrayals and unrequited romance.

It’s all breathless and melodramatic but with sudden disconcerting switches to broad comedy. In fact the entire book has a certain tongue-in-cheek quality to it. The criminal organisation of the Habits Noirs is a fascinating creation and can be seen as the forerunner of most conspiracy theory fiction.

Féval was pre-eminently a writer of popular entertainment with few pretensions to literary distinction although from time to time he did succumb to the temptation to make a bid for literary respectability, without success. His success as a popular novelist was however undeniable. The Habits Noirs cycle was never completed. After losing his entire considerable fortune in a financial scandal Féval found God and turned to the writing of religious novels.

'Salem Street is a bit rough round the edges but it’s fun. Translator Brian Stableford provides an informative introduction to the Black Coat Press edition of this important pioneering work of crime fiction.
Posted by dfordoom at 3:46 AM