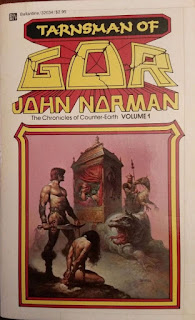 John Norman’s Gor novels, that notorious cycle of sword-and-planet tales, began in 1966 with Tarnsman of Gor. Norman is an American professor of philosophy and he uses the novels to explore philosophical, political, cultural and psychological ideas. Norman is a big fan of Nietzsche and Freud, so you have been warned. The good news is that he is also quite heavily influenced by Edgar Rice Burroughs, a much more wholesome influence.

In the mid-1960s Tarl Cabot, a young Englishman teaching at a small American college, receives a strange message from his father, who had mysteriously disappeared years earlier. The message is dated February 3rd 1640. It tells him that he can cannot evade his destiny. Which proves to be the case. While camping in the woods he is taken aboard a spacecraft to the planet Gor.

Gor is a kind of Counter-Earth, apparently part of our solar system but in an eccentric orbit around the Sun, an orbit that ensures that the Sun is always between Earth and Gor. Which is why the planet’s existence has never been suspected. Gor is a very Earth-like planet, although slightly smaller than Earth and with three small moons. The people of Gor are human.

If you want to write a science fiction novel set on another planet but you want the characters to be fully human there are several possible ways of making this plausible. Norman’s solution is a simple but effective one. The people of Gor all came originally from Earth, brought to Gor by the Priest-Kings (who are most likely non-human).

Gor society is rather strange and some ways technologically very primitive. Their most advanced weapons systems are crossbows and spears. They have no modern transportation technology. On the other hand they have primitive computers (the Translators). They seem to have electric lighting.

While the comparisons to Edgar Rice Burroughs are fairly obvious the novel is also reminiscent of Robert E. Howard’s sword & sorcery tales. Norman is trying to capture the spirit of a genuinely alien genuinely barbarian society. It’s not just that the social rules are different. The worldview that shapes those social rules is profoundly different.

As a sword-and-planet adventure yarn this is fairly routine (although perfectly competent) but it’s obvious that Norman is more interested in the world of Gor itself, particular its politics and its culture. Gor is divided into fiercely independent city-states but one man, Marlenus of Ar, wants to change all that. He wants to seep the city-states away and establish an empire. There are both upsides and downsides to this and Norman is prepared to let us see both sides of the question. Marlenus is ruthless and power-hungry but he’s also a man of vision.

Norman is all interested in the clash of cultures angle. Slavery is an established part of the social structure on Gor and this includes female sex slavery, this being the reason the novels are so controversial and the reason that attempts have been made to suppress them. It should perhaps be noted however that young Tarl Cabot, the narrator of the novel, is not at all sure that he approves of many aspects of the Gorean social system, including the caste system and slavery. On the other hand he is increasingly not sure whether he disapproves. He can see some virtues in the barbaric society of Gor, and he can see the vices as well.

The slavery theme is pretty central to the book and really can’t be evaded. The master-slave relationship between Tarl and Talema is the core of the story. And it’s not a simple master-slave relationship. There are lots of contradictions in it and it’s complicated by the fact that Tarl has fallen hopelessly in love with her. Norman is interested in doing more tham merely giving us an S&M fantasy (it’s worth noting that there is zero explicit sex and in fact there’s very close to being no actual sex at all in the book). Norman is interested to trying to tease out the nature of freedom in the broadest sense and the nature of slavery in the broadest sense. And while Talema is Tarl’s slave, he is in many ways her slave. Love and desire can bind us more completely than chains.

The sex slavery theme is actually treated with a fair amount of subtlety. What Tarl Cabot only gradually comes to understand is that it is an institution that is part and parcel of Gorean culture and its taken for granted there, by women as well as men. It’s certainly taken for granted by Talema, even when she’s the sex slave. When she offers her submission to Tarl she naturally expects that he will then take her sexually, by force if necessary. When he is unwilling to do so she despises him and she is offended. Tarl keeps thinking that Talema is annoyed at being his slave when in fact she’s annoyed that he is not treating her as a slave. Talema is a product of her culture. She cannot comprehend the idea that society could be organised in any other way. A man should treat a slave in a certain way. It’s the way things are done. Her cultural values are more important to her than her freedom and Tarl’s alien cultural concepts upset her. He has proven himself to be a great warrior. He has won her fair and square. She belongs to him. This is something that seems to her to be entirely natural and proper. He has won the right to her body.

In this first book at least Norman gives no indication of agreeing with either Talema’s point of view or Tarl’s. He is merely describing the clash of totally incompatible and alien cultural viewpoints. Of course the very fact that he gives us both points of view will upset many readers. It was a provocative thing to do but I guess if you’re a philosopher then presenting provocative points of view is what you do. It is important to keep in mind though that Norman is describing an alien social system, not advocating for it. When writers create imaginary societies they’re generally using them to criticise (or praise) their own societies and the US in 1966 was certainly in a state of cultural and social flux.

The fact that the psychological and political underpinnings of Gorean society are examined in some depth sets this novel a little bit apart from a routine sword-and-planet yarn. And the fact that Gorean society is supposed to make us as uneasy and uncomfortable as it makes Tarl Cabot adds considerable interest. And there is enough action to please the average sword-and-planet fan as well.

You might like or dislike Tarnsman of Gor but it’s worth finding out for yourself what all the fuss was about. I’m going to recommend it.
Posted by dfordoom at 5:19 AM