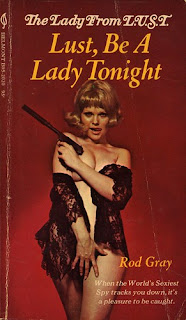 Lust, Be a Lady Tonight is the first of The Lady from L.U.S.T. sleazy spy thrillers, published in 1968.

Spies were one of the major obsessions of the 60s. Spy fiction sold in huge quantities. Spy movies were box-office bonanzas. In both the U.S. and Britain there was a proliferation of TV series about spies.

Ian Fleming’s Bond novels raised the stakes as far as sex in spy fiction was concerned, but by the late 1960s the Bond novels seemed very tame. Adding very large helpings of sex and sleaze to the spy story was obviously an idea that was going to work commercially. There were quite a few spy sleaze book series. One of the most successful was The Lady from L.U.S.T. series which ran to 23 novels.

This series was created by Gardner Francis Fox (1911-1986) who wrote most, if not all, the books in this series using the pseudonym Rod Gray. Fox was a prolific author of comic books who also wrote science fiction and enormous numbers of trashy pulpy paperback originals. As well as The Lady from L.U.S.T. he created another sexy secret gent heroine, Cherry Delight, who is even more fun.

Eve Drum has a couple of unusual talents for a girl. She’s not only a martial arts expert she is also an amateur safe-cracker. Her father was a locksmith and taught her everything there was to know about cracking safes. She’s never actually carried out any robberies but she does have that talent.

So it’s not surprising that Eve gets recruited by L.U.S.T. (the League of Underground Spies and Terrorists). Despite their name L.U.S.T. are the good guys. They’re a top-secret U.S. government agency that handles espionage and counter-espionage cases that are too dirty for the F.B.I. or the C.I.A. - L.U.S.T. commits murders and robberies but they only kill bad guys so it’s OK.

Eve is perfectly qualified to be a L.U.S.T. - female L.U.S.T. agents have to be skilled in the use of firearms and explosives and unarmed combat but they also need advanced bedroom skills. Their main weapon is sex. Luckily Eve Drum happens to be very good at sex and she’s ready to have sex any time of the day or night and with anyone she’s ordered to seduce. 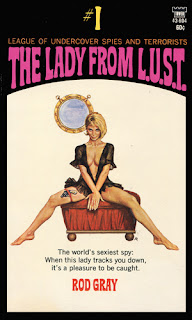 The bad guys work for H.A.T.E. and they’re blackmailing top American scientists. Eve’s first assignment is to retrieve some compromising pictures from the safe of a charming Italian count who is a senior H.A.T.E. agent. Cracking the Count’s safe won’t be a huge challenge for Eve but she will need to be able to work undisturbed. The Count is so focused on getting into Eve’s pants that it’s not likely he’s going to let her get on with her safe-cracking. Even decides there’s only one thing to do. She will have to exhaust the Count completely. She challenges him to make love to her in all ten of the sexual positions described in one of the great erotic classics. After having sex with her ten times in succession she figures the Count will then want a long long sleep.

Eve’s next assignment is to track down the woman in those compromising photos. This will require Eve to enter the decadent world of very rich people with exotic sexual tastes, who have the power and the money to indulge those tastes. It will be a dangerous assignment. Eve is supplied with a number of gadgets cooked up by L.U.S.T.’s technical specialists. There’s the usual deadly cigarette lighter but there’s also a pair of explosive panties. As you can imagine they’re something you’d only resort to in a dire emergency. And her bra is a sophisticated communications device.

Eve gets into the usual scrapes that spies get into, falling into the hands of the bad guys and getting tortured. She also uses her sexual allure on various men, sometimes in the line of duty, sometimes for purely recreational purposes. She’s never slept with a woman before, but if it’s something that her duty to her country demands of her then she’s prepared to try it. No sexual sacrifice is too great for Eve. It’s not for nothing that she’s known as Agent Double Oh Sex.

There’s lots and lots of sex in this book. There is a spy thriller plot as well. It’s sleaze fiction and it’s pulpy spy fiction and the sleaze stuff and the spy stuff are surprisingly well integrated. You just have to accept that Eve is a spy whose main weapon is her sexuality, and there’s nothing implausible about that. From the dawn of history female spies have relied on their sexual allure. And somehow whenever Eve jumps into bed with a guy there does seem to be some professional justification for it. And Eve really is a professional - she’s not emotionless but she does stay in control when she’s on a case.

Of course it’s all very very trashy. If you’re not attracted by the idea of a sexy trashy ultra-pulpy spy thriller then you’d be advised to stay well clear of this one. But if you do enjoy that sort of thing then it’s good-natured lighthearted fun.
Posted by dfordoom at 4:27 AM