The Gentle Giants of Ganymede 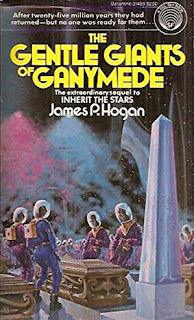 Since this book is part of a trilogy I’m going to be as careful as possible not to reveal any spoilers for Inherit the Stars. In very general terms the trilogy concerns the discovery of a 50,000 year-old human skeleton on the Moon in circumstances that are simply impossible and the even more startling discovery of a much much older spaceship on one of the moons of Jupiter. Both discoveries suggest that everything we thought we knew about the history of the solar system might be wrong. The discoveries also point to the existence of another planet, named Minerva, but the big question is why does Minerva no longer exist?

Inherit the Stars was a kind of scientific mystery story with a host of baffling and contradictory clues and a surprising but very satisfactory solution to the mystery. There are also hints of a mystery to be unravelled in The Gentle Giants of Ganymede. In fact it appears that the whole trilogy is the story of the gradual unravelling of the true history of the solar system.

It’s these mystery elements that are Hogan’s greatest strengths. They’re as enthralling as a classic detective story. There are various clues thrown at us that seem to point to a particular suspect (or in this case a particular explanatory theory) and then just as both the reader and the characters in the book are confident that the puzzle has been solved another clue pops up that totally demolishes that theory. So it’s back to square one, with the focus shifting to a different suspect (or theory).

It’s also interesting that there are two simultaneous investigations going on. The humans are not the only ones trying to solve the puzzle.

Inherit the Stars was Hogan’s first novel but the overarching plot of the trilogy is so complex and so intricately interconnected that it’s difficult to believe he could have improvised it. Surely he must have had the basic plan worked out when he wrote the first novel.

Unfortunately Hogan has his weaknesses as well. Like so many science fiction writers he has ludicrously optimistic ideas about the future of human society. The main plot strands unfold in a future of world government and universal peace. Apparently one day humanity realised that war was wicked so they just stopped fighting and abolished the military and established a utopia of peace, love and understanding.

Hogan also has some libertarian ideas that are slightly eccentric even by libertarian standards.

He does however manage to create aliens that are genuinely alien. Aliens whose evolution has been so radically different as to give the aliens and humans outlooks on life that are close to being mutually incomprehensible.

This is very much the science fiction of big ideas. In this case the big ideas involve both biology and physics with the understanding of both fields being dramatically challenged by those discoveries on the Moon and on Ganymede. The science is purely speculative but it’s fascinating speculation.

If you want space battles this book is not for you. On the other hand if you want wild provocative ideas developed with great skill and cleverness then you might well enjoy this book as much as I did. Highly recommended.