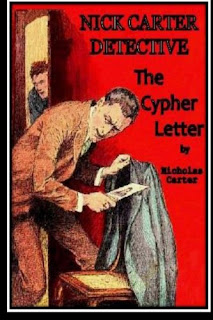 The Cypher Letter is a Nick Carter mystery.

Nick Carter is a fictional character with an intriguing history. He began life as a Sherlock Holmes-style detective in dime novels between 1886 and 1915. The character was revived in pulp magazines in the 1920s and again in the 1930s (this time as a hardboiled detective). In the 1960s he was revived yet again as a James Bond-style secret agent in the long-running Killmaster series of novels which were still being published as late as 1990. There have been various Nick Carter movies and radio serials.

I have no idea when The Cypher Letter was written but the fact that it takes place in New York but there’s not a single mention of cars or telephones leads me to suspect that it’s a pretty early story, possibly from the 1890s.

Nick Carter’s wife has come across a cypher letter the significance of which is unknown. At the same time Nick’s pal, Inspector Byrnes, has received an anonymous letter which claims that a serious crime has been committed in the Kempton mansion. These two letters do not appear to be connected but of course they are.

Old Archibald Kempton is blind but he’s extremely rich. He lives with this two daughters (who bear no resemblance to one another in looks or personality).

A child has been kidnapped but it’s not obvious how that ties in. Nick spots a smooth-talking gent leaving the Kempton mansion and suspects he could be worth following. The gent is Mortimer Guernsey and Nick’s suspicion that he is mixed up in this case proves to be well-founded.

Nick does some shadowing of suspects and he gets shadowed in turn, and that nearly costs him his life.

The plot is outrageously melodramatic with some very far-fetched elements and lots of unlikely coincidences. And of course hair’s-breadth escapes from certain death.

This incarnation of Nick Carter is definitely not hardboiled nor is he a tough guy but he is just a bit more of an action hero than Holmes. He definitely has an American flavour.

This very short novel is interesting mostly for historical reasons. It’s a glimpse into the world of the American dime novel. And of course it gives us a sampling of the first version of a character who just kept bouncing back in different forms, and a character who was one of the first popular American fictional detectives. If you’re a serious student of the history of crime fiction you need to sample at least one Nick Carter story. Apart from that historical interest it doesn’t have all that much to recommend it although you might get some amusement from the outlandishly melodramatic plot. So maybe worth a look but with quite a few reservations.

This book seems to be obtainable only in a print-on-demand form which is riddled with distracting typographical errors.
Posted by dfordoom at 11:47 AM