Henry Kuttner 's Crypt-City of the Deathless One 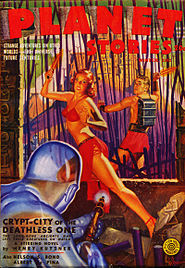 Henry Kuttner (1915-1958) was a successful American pulp writer who was married to an even more celebrated pulp writer, Catherine L. Moore, with whom he often collaborated. Kuttner’s novella Crypt-City of the Deathless One was published in 1943 in Planet Stories (an extraordinarily good pulp magazine). The novella is a science fiction tale, with just a hint of zombies.

Ed Garth is drinking himself to death in a seedy bar on Ganymede, one of the moons of Jupiter. He gets an offer from a man named Brown, an offer he can’t refuse. In fact Garth will accept any offer that will provide him with money to buy liquor. He will be acting as a guide to an expedition to the Black Forest on Ganymede.

No sane person would accept this offer. This will be an illegal expedition. And no Earthman has ever entered the Black Forest and come out alive. No Earthman, apart from Ed Garth.

Ganymede was once home to an incredibly advanced civilisation, a civilisation long gone. All that remains is a vast collection of machines and robots and no-one has ever been able to figure out how to make them work. There is rumoured to be a lost city of this ancient civilisation deep in the Black Forest. Garth figures that Brown’s expedition is tying to find the secret of the power source used by the ancient civilisation. They are rumoured to have discovered the secret of atomic power (this was written in 1943 when atomic power was still science fiction).

The secret of the power source would be a fabulous prize since Earth is rapidly running out of power sources. Unless the secret of atomic power can be unlocked civilisation on Earth will collapse.

There may be another secret in that lost city. One just as important, and much more important personally to Ed Garth. That city may hold the key to a cure for the Silver Plague that is ravaging the Earth’s population. That’s the secret Ed Garth, Doc Willard and Moira were looking for five years earlier. Garth was the only survivor of that expedition and he brought back with home a horrible memory. The memory is horrible because it is so vague. One of the many reasons nobody goes into the Black Forest is the poison released by the noctoli plant, a poison which strips a man of his memories and his will. He becomes little more than a zombie.

Garth has built up an immunity to the noctoli poison and he thinks he has a method of protecting others from it but the method is far from fool-proof. If it doesn’t work then this illegal expedition will be in a lot of trouble.

That’s without taking into account the other horrors of the Black Forest, horrors so well camouflaged that you don’t know they’re there until it’s too late. Ed Garth knows the nature of these horrors. Entering the Black Forest with Ed Garth as a guide would be an insane risk, but entering that forest without him would be simple suicide. The secrets hidden in the lost city of the ancients justify an insane risk.

The journey proves to be just the nightmare that Ed Garth expected but turning back would be more dangerous than going on.

Garth isn’t sure if he’s happy that archaeologist Paula Trent is part of the expedition. She reminds him of Moira, and Moira is the subject of another of his personal nightmares.

What’s cool about this book is that there’s plenty of excitement but hardly any violence - the threats come mostly not from bad guys but from the deadly flora and fauna of Ganymede. Ganymede is not a nice world. Kuttner displays plenty of imagination in throwing fresh horrors at Ed Garth. There’s a nice atmosphere of doom as more and more things go wrong.

This is a kind of lost world story and it obeys most of the conventions of that genre.

The ending is not the ending you expect but it’s highly effective.