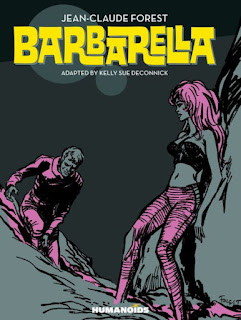 I have very little interest in comics. In fact almost no interest at all. I do however make an exception for European comics for grown-ups of the 1960s and 70s such as the Italian fumetti. They have a tone and a style that differentiates them radically from American comics of the 50s and 60s. They’re a lot more sophisticated. And it’s certainly worth making an exception for Barbarella.

Barbarella was created by Jean-Claude Forest and the first Barbarella comic saw the light of day in the French V Magazine in 1962. Her first appearance in book form was in 1964. She become even more famous when Roger Vadim’s movie came out in 1968, with Jane Fonda in the title rôle. Brigitte Bardot was originally wanted for the part which would have been appropriate given that the physical appearance of the comic strip character was based on Bardot. Bardot could have played the rôle but it’s hard to imagine that she could have done a better job than Jane Fonda.

Censorship in France had been quite strict in the 50s and comics were regarded with official disapproval. Barbarella was a sensation at the time and remains a pop culture landmark. Jean-Claude Forest added sexiness to comics, and that was revolutionary in 1962. I say sexiness rather than sex. The Barbarella comic strip certainly has plenty of eroticism but it’s a cheerful good-natured healthy eroticism. This is eroticism as fun.

And there’s plenty of adventure and humour as well.

There have been several attempts to translate the comic into English, most recently with an “adaptation” (always a worrying word) by Kelly Sue DeConnick. Humanoids Press have published the first two Barbarella books, Barbarella and Wrath of the Minute-Eater (Les Colères du mange-minutes) in a single inexpensive volume.

The 1968 movie follows the plot of the first book surprisingly closely. The bird-man character is there, as is a character named Durand (who would give the band Duran Duran their name).

This is definitely science fiction, as Barbarella travels the galaxy getting into various scrapes. The science fiction elements are wildly unrealistic but they’re quite imaginative and clever. Forest was quite good at creating strange alien worlds, and putting his heroine into interestingly and amusingly bizarre situations.

The visual style of the comic is as stylish and lighthearted as the content. A lot of the situations Barbarella gets into seem to involve the loss of her clothing, not that this bothers her in the least. In 1962 Barbarella seemed quite remarkably sexually liberated (and in today’s repressive climate she again seems refreshingly liberated). Barbarella rather likes sex. That’s not to say that she isn’t interested in love, but if she can’t have love she’s happy to make do with sex.

In the second book, Wrath of the Minute-Eater, Barbarella is running the galaxy’s most outrageous circus, the Circus Delirium. She needs a new act and an aquaman sounds promising. The aquamen have gills and cannot breathe air. They can however have normal sexual relations. Barbarella has found that out for herself. Narval the aquaman however has another agenda, and it takes our heroine to the fringe worlds of the galaxy where time itself is different. Everything about this story is connected in some way with time. Her companions this time are a clown and a malfunctioning female sexbot.

Barbarella is a delightful heroine. For an adventure heroine she’s rather non-violent. Well, mostly. She prefers to use her innocence, her adorableness and her hotness to resolve problems. It’s amazing how many conflicts can be resolved by seducing people rather than trying to shoot them. And even if the conflict isn’t resolved as least you get to have some sex, and that’s never a bad thing.

The Barbarella comic is witty, clever, stylish and good-natured. And sexy.

Even if you’re a person who doesn’t like comics Barbarella is very highly recommended. Barbarella is one of the great pop culture icons, and her comics are deliriously entertaining.
Posted by dfordoom at 7:50 AM