Carter Brown's Booty for a Babe 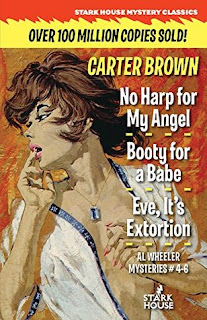 English-born Australian crime fiction writer Alan Yates (1923-1985) wrote round 300 novels under the name Carter Brown. He not only wrote a lot of books, he sold a lot of books - around 120 million of them. And like so many bestselling authors of his era he then faded into obscurity. His most popular series character was LA homicide cop Lieutenant Al Wheeler.

Booty for a Babe is a fairy early Al Wheeler book, appearing in 1956.

His boss has decided that Wheeler is too unconventional and too irresponsible to be a Homicide lieutenant. But he does manage to crack some very difficult cases so he’s been put on special assignment. When a case comes up that is as unconventional as he is then it’s Al’s baby. And such a case has now come up.

Professor Todt has been murdered at a science fiction fan convention at a fancy hotel. He was shot, but he wasn’t shot in a normal way. He was found with a tungsten dart in his heart. There were eighty witnesses and none of them saw a thing.

Al finds the world of science fiction fandom rather bewildering. Professor Todt had a theory about time. He thought time could be stopped, if only the alien Delfs could be persuaded to stop it. This wasn’t the plot for a science fiction story. The professor really believed this theory. Al is even more disturbed when it becomes likely that the motive for the murder had something to do with the professor’s crazy theory.

Al also has to deal with a ditzy redhead named Flavia, who runs the convention. And an even ditzier blonde named Annabelle Starr, one of the fans. He thinks they’re both crazy but he also thinks it’s worth trying to get them into bed. They might provide some valuable clues, but even if they don’t it would still be worth trying to get them into bed.

There’s also Nicky Spain, who’s a shady businessman, but he had some involvement with the professor. Which doesn’t make sense - shady businessman and crazy professors don’t usually have much in common. Spain is staying in the hotel with his girlfriend Carlotta, and she could be worth bedding as well.

The further the case goes the crazier it gets. It seems that alchemy could be involved as well.

Wheeler is a cop who always has a drink on one hand a blonde in the other. It’s not that he’s a heavy drinker. He doesn’t take a drink first thing in the morning. He has a shower and breakfast first. Sometimes it’s nearly lunch time before he starts drinking.

Apart from drinking and chasing skirt Al’s investigative methods mostly involve picking someone who might respond to pressure and putting that person under as much pressure as possible. His methods are exactly ethical but they do produce results. He’s also pretty good at setting traps for suspects, even when he has no idea if they’re guilty or not.

This is a somewhat tongue-in-cheek hardboiled PI thriller with quite a bit of humour and some plot elements that sound like they’d be more at home in a pulp sci-fi novel. It works because the author has style and energy and he makes it work. Al Wheeler is cheerfully immoral but he has a kind of vulgar charm. There’s nothing remotely subtle about him.

The plot is serviceable but it’s the fun to be had along the way that is the attraction.

I have no idea why the title was chosen, except that I guess the publisher thought it sounded cool.

The Carter Brown books are not to be taken too seriously but they are enormous fun. Booty for a Babe is highly recommended.

I’ve reviewed two other Carter Brown novels - The Stripper and No Harp For My Angel.