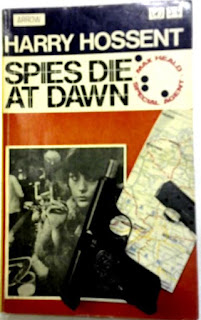 Max Heald is a British intelligence agent who is just about go go up to his flat when he notices something odd. The lights are on. Most people wouldn’t think much of such a thing but Max is a spy and he wants to keep living so he has to notice things like that. He therefore lets Mr Mortimer (his boss) know, then proceeds up to his flat where a surprise is waiting for him. The surprise is his wife Christina. It’s a surprise because three years earlier she had defected to the Russians. In fact at the time he married her she was a double agent.

There’s another surprise in store for Max - two men from the Special Division. The Special Division (otherwise known as Section 9) is a much-feared branch of the Soviet MVD. They specialise in liquidating people, so it’s not a very pleasant surprise. They’ve never operated in Britain before but now they are indeed in Britain and they seem to be very interested in Christina. But why?

Christina’s story is that she’s defected back to the West because Bennett has done so and now she’s under suspicion so she has no choice. Her story is interesting and Max thinks that some of it may even be true. Bennett is an English journalist who defected to the Soviet bloc at about the same time as Christina.

Mr Mortimer is very interested in all of this. What he doesn’t want is Max on the case. Max is too emotionally involved. He also knows that whatever orders he gives Max is going to pursue the case anyway. Which he does.

There are multiple players in this game. Some are motivated by money, some by ideology, some by loyalty and some by love. There’s a man named Reisening. Christina claims that this man contacted her. There’s an actor named Roland Bestwick. And a professional wrestler known as the Whirler. There’s Claude Meygeth, who is in the business of selling information. There’s Meygeth’s girlfriend Nickie Montreux. There’s Aintree, who runs a protection racket but has been known to do jobs for Max. There’s the Pole Ebanstey, who is supposed to be helping Max but whose loyalty is to Mr Mortimer. There’s Bennett, whose motives for defecting to the Soviet bloc are unclear and whose motives for defecting back to the West are even murkier. Christina’s motives are even more mysterious - is she a double agent who has returned to her original loyalty or is she now a triple agent?

Any of these players could change sides at any time, or could try to play for both sides at once. The opportunities for double-crosses are practically limitless and there will indeed be double-crosses.

It all ends with a splendid extended action finale in a funhouse.

Spies Die At Dawn belongs more to the gritty realist school of spy fiction than to the Bondian school. There’s lots of violence (some it fairly graphic by late 50s standards), there’s a willingness to resort to torture, there are lots of betrayals and nobody can trust anybody else. Max Heald is a tough professional but he has an emotional life which sometimes clouds his judgment. He’s certainly no infallible super-spy. There’s no sex although there is one abortive seduction when one of the women characters tries to influence Max by shedding her clothes.

Hossent’s prose is workmanlike but effective. Max Heald is not the sort of spy who trades wisecracks. The tone remains dark and serious.

Spies Die At Dawn is a very competent tightly plotted spy thriller which can be highly recommended.
Posted by dfordoom at 8:38 AM