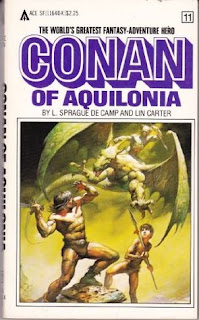 I’m a huge fan of Robert E. Howard’s Conan stories but I haven’t read any of the many Conan pastiches by other authors. Since I happen to own a copy of L. Sprague de Camp and Lin Carter’s 1978 Conan of Aquilonia (which cost me the princely sum of twenty-five cents) I figured it was time to remedy that situation.

This is an older Conan, nearing sixty but still a formidable warrior. He is now a king and he has a twelve-year-old son and heir, Conn. Conn has gone missing. He’s fallen into the hands of a circle of evil sorcerers led by the most evil of them all, Thoth-Amon. The sorcerers have reason to hate Conan and they want revenge.

In the first story, The Witch of the Mists, Conan (now secure on the throne of Aquilonia) faces a formidable challenge. Not just a circle of evil sorcerers but a coalition of several circles of thoroughly nasty black magicians. The leader is an old enemy of Conn’s, the sorcerer Thoth-Amon.

Black Sphinx of Nebthu is Conan’s second encounter with Thoth-Amon, an encounter which involves an epic fight between black magic and white magic and ends with the unleashing of an appalling monster which nobody, not even Thoth-Amon, can control.

Conan’s struggle against Thoth-Amon continues in Red Moon of Zembabwei. Leading the Aquilonian army through trackless wastes he encounters the horror of the wyverns, prehistoric flying reptiles trained by the Zembabweians. Conan and Conn are carried off by the these flying horrors to an ancient city, built before the beginnings of history by a pre-human race. They are held captive in the infamous black towers, with no doors and no windows. There seems to no escape for them.
The pursuit of Thoth-Amon continues in Shadows in the Skull and takes Conan to a palace-city carved into a cliff, a fortress carved in the likeness of a gigantic human skull. It’s surrounded by some kind of invisible barrier. Having penetrated the barrier Conan and his companions find something quite unexpected. In fact there are quite a few surprises in store for Conan and Conn.
These two stories ares a marked improvement on the first two.

Conn gets to do a few heroic things but he’s a thoroughly lifeless character. 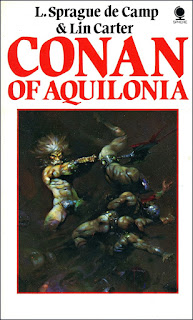 Thoth-Amon is an effective enough chief villain and there are a few good subsidiary villains as well.

All the correct ingredients are there and the stories are reasonably entertaining sword & sorcery tales but they just don’t have that Robert E. Howard touch. It’s a touch that no other writer has ever been able to emulate successfully. The vitality and the masculine energy that Howard imparted to his stories is just not there, Howard’s matchless ability to evoke an atmosphere of doom or menace is not there either.

It’s not that the ideas behind the stories are bad and it’s not that they’re badly plotted. They’re perfectly competent. They just don’t leap off the page into the reader’s imagination the way Howard’s stories do.

There’s nothing particularly wrong with Conan of Aquilonia. It’s perfectly decent second-tier sword & sorcery with plenty of action and quite a bit of creepiness. The wyverns, the serpent-folk and the serpent-god are all nice touches. It’s just not Robert E. Howard and this Conan is not quite the authentic Conan. Maybe worth a look if you’re a very keen sword & sorcery fan and you’ve read everything by the major writers in the genre.
Posted by dfordoom at 8:04 AM