Rog Phillips' World of If 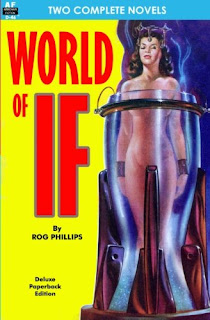 Roger Phillip Graham (1909-1966) had a moderately successful career as a writer, using various pseudonyms. He is regarded as one of the people most instrumental in creating science fiction fandom. World of If was published under his Rog Phillips pseudonym in 1951.

World of If presents an interesting take on the problem of time. It is set in 1984. John Dow is a successful publisher who is asked by a young man, Dr Simon French, to take part in a research project run by the Rexler Research Company. They had been using hypnosis to regress people to earlier periods of their lives when someone had the bright idea of regressing them to a point in their lives in the future. They discovered that the futures remembered by different people often agreed in significant ways. It’s not time travel, it’s more a case of people being able to tap into potential futures. The future is not fixed but there are certain probabilities. Rexler Research have found that with this technique they can to some degree predict the future.

Then they decided to do something different - hypnotising people to live out potential futures as they had existed in the past.

John Dow is actually not quite what he appears to be. He is not just a businessman. He controls a network of influential people (including politicians who are bought and paid for) who are engaged in a vast project to defeat world communism. Dr French regresses him to a past that differs slightly from the actual past. In this alternate past America is taken over by the communists in 1953.

So this can also be seen as a Red Scare story (and a rather hysterical one).

A very large part of the book is taken up by Dow’s life in that potential alternate past of life under communism. At times it drags just a little. There is however some interesting stuff about the nature of power and corruption and about the way people adapt themselves to power, and the compromises people will make. And the ways in which they will rationalise their behaviour.

Once we get back to 1984 it suddenly becomes really interesting as the author throws even more ideas about time at us. We find out what Dr French’s research is really all about and we get some neat plot twists.

You do have to concentrate when reading this book since apart from John Dow’s lengthy sojourn in the Worlds of If there are also flashbacks from other characters.

The style is pulpy and rather on the unpolished side.

Phillips is strongest when he’s dealing with ideas although he does attempt some character complexity and the idea of people in alternate pasts behaving in ways that are both different from their actual lives but also very much consistently in character is developed quite well.

Mostly it’s a clever and original take on the ideas of the future being both changeable and unchangeable and it’s in some ways an anticipation of much later works by other novelists exploring multiple parallel timelines (even in some ways an anticipation of Michael Moorcock’s multiverse idea). The author cleverly suggests an ambiguity about those alternate Worlds of If. Are they imaginary and do they have some reality? There’s enough cleverness here to make World of If worth a look. Recommended, if you can deal with some political heavy-handedness.
Posted by dfordoom at 6:20 AM