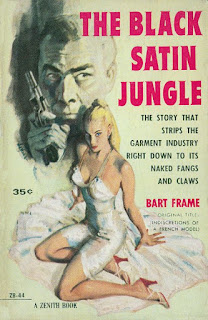 Bart Frame’s The Black Satin Jungle (also published as Indiscretions of a French Model) was published in 1953. It’s a sin and sensation potboiler set in the world of modelling.

Louise Bonnard was a can-can dancer in Paris and her life had not been a happy one. Her father, an unsuccessful painter, died when she was thirteen. Her mother turned to drink and supported herself and her daughter by selling herself on the streets before finally killing herself. Then along came Danny Birnham to the rescue. Danny was a handsome American soldier and he swept Louise off her feet. He married her and the plan was that he would return to America and she would join him a few months later.

Now she’s in New York and reality is starting to sink in. Danny is not a rich American. He’s a loser and he drinks, and he’s a violent drunk. He lives in a crummy apartment with his lecherous alcoholic father, his father’s broken-down defeated common law wife Jessie and his deadbeat kid brother Earl. Louise is naïve but not stupid. She’s not even all that naïve. She just allowed herself to believe that Danny was the knight in shining armour she so desperately wanted and needed. She quickly figures out that Danny is going to bring her nothing but misery.

She has made one fried in New York, a girl named Sylvia. Sylvia offers her a way out. She can get Louise a job as a lingerie model. Louise is twenty-two and has a fabulous figure. She could make big money. Louise isn’t too sure about the modelling thing but it has to be better than being tied for life to a bum like Danny.

She soon finds out that there’s only a fine line between being a lingerie model and being a call girl. Her boss expects her to be nice to his clients. The other girls explain to her that this means sleeping with them. This triggers some very conflicting emotions for Louise. She has this idea that her mother was a whore so therefore she must be a whore and that her mother killed herself so she must be destined to do likewise. At the same time she really likes having sex with the clients. She had been ashamed of being a can-can dancer but enjoyed it at the same time. When she started the lingerie modelling she was both disturbed and excited by the way the men looked at her. She wants to be a whore and at the same time she hates herself for it.

Sylvia suggests that maybe she should talk to a friend of hers who’s a psychologist. The psychologist can’t wait to get her to do a Rorschach test. This was the 1950s and psychiatry and psychology were new and exciting and were going to unlock all the secrets of human behaviour. Writers (and film-makers) were really excited by the possibilities of stories based on these daring new theories. For someone writing sleaze fiction such possibilities were obviously very enticing.

This book is very 1950s is its attitudes towards sex. It’s taken for granted that prostitution is really wicked and a great social evil that needs to be stamped out. At the same time America in the 50s was absolutely obsessed with sex and for authors dealing with sexual subject matter was a great way to show how modern and enlightened they were. Louise’s conflicted feelings about sex are mirrored by the book’s conflicting objectives. The author wants to be moralistic (because if you were going to get away with such subject matter you had to be) and at the same time he’s obviously determined to exploit the sleaze factor as much as he possibly can.

Of course that raises a problem. Louise is a bad girl so she must be punished but she’s also the heroine so she must be saved. The advantage of this from a dramatic point of view is that you’re never quite sure in these books whether the impulse to save the heroine will win out over the necessity of seeing her pay for her sins.

Of course she and the psychologist fall in love but that’s a problem because Louise knows she doesn’t deserve the love of a decent man. He’ll only try to save her and she knows that she’s damned.

One way to deal with conflicts like this is to pour yourself a little drink. Or maybe several little drinks. Pretty soon Louise is pouring herself lots of drinks. That’s appropriate as well. Her mother was a drunkard so she has to become a drunkard. You can’t escape destiny. Destiny has plenty more hard knocks in store for Louise Bonnard. She’s soon rolling in money but that’s no good - any good fortune that comes from sin has to be paid for.

And the past is hard to escape as well. It catches up to you at the worst possible moments.

The Black Satin Jungle is reasonably entertaining. It’s not a great example of the sleaze fiction genre. It’s not as good as Orrie Hitt’s Wayward Girl or Florence Stonebreaker’s wonderful Reno Tramp but if you enjoy this genre it’s worth a look.