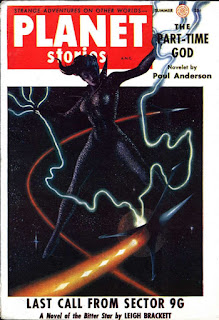 I guess you could call Last Call from Sector 9G a science fiction spy story. Lloyd Durham is all washed up. He lost his job, nobody will employ him and things didn’t work out with his girl. All he has left is the booze. Maybe it was the booze that got him into trouble in the first place. Durham doesn’t think so but then he doesn’t like to admit that the mess he’s in may have been all his fault. Now a senior diplomat from the Federation, Hawtree, is giving him a second chance. Or at least that’s what Durham thinks. Hawtree has offered him a diplomatic mission to Nanta Dik, one of the two inhabited planets in Sector 9G.

What Durham doesn’t realise is that he was picked for the mission because he was a drunken loser who could be relied on to make a mess of it. But what happens when you pick someone for a mission based on such an assumption and that someone decides, for once in his life, to try really hard not to mess up?

Durham manages, quite accidentally, to get his ex-girlfriend mixed up in this whole situation. And Susan just happens to be Hawtree’s daughter.

Brackett packs plenty of action into her story. There are space hijackings, Durham falls into the hands of various warring factions, there’s a real war brewing in Sector 9G, and maybe civil war as well. There are quite a few players representing quite a few factions involved and it’s not easy for Durham to tell the god guys from the bad guys. He really had no desire to get mixed up in wars and inter-planetary intrigues. He just wanted to prove he could stay sober long enough to carry out one simple assignment so he could get his life back together again. Now he’s in such a mess that staying sober seems like a really bad idea. And staying alive looks like being a real challenge.

He’d also like to keep Susan alive although there are times he’s so infuriated he’d like to strangle her. Maybe he hates her. Maybe he still loves her.

He will discover the terrifying secret of the Bitter Star and he will encounter the darkbirds. The darkbirds are alive and they’re intelligent, although they’re not alive in a sense that is comprehensible to a human. They’re not composed of matter. He has no idea whose side the darkbirds are on. All he knows is that they scare him.

He’s also not sure whether the alien Jubb is a good guy or a bad guy he he does know that Jubb is pretty important.

This is a future universe that is very much like ours - there’s good and there’s bad in it, there’s corruption and there’s idealism, there’s shady politics and there are crooked businessmen and there are honest people (both human and non-human) trying to do the right thing. All of Brackett’s imaginary future societies have a fair degree of moral complexity, with plenty of shades of grey. In this case there are shades of grey to both the human and non-human characters.

Although I’m a major fan of Leigh Brackett’s work I hadn’t heard of this novella until I came across this review of it on the Ontos blog.

It’s been reissued in paperback in one of Armchair Fiction’s two-novel editions, paired with H. Beam Piper’s Time Crime (which I’ll be reviewing in the near future).

I’d previously only read Brackett’s sword-and-planet stories so this is my first encounter with her space opera. I do prefer her sword-and-planet stuff (very few people could match her in that genre) but Last Call from Sector 9G is not a bad little tale. Since this is Leigh Brackett it goes without saying that it’s well-written. Recommended.
Posted by dfordoom at 4:33 AM