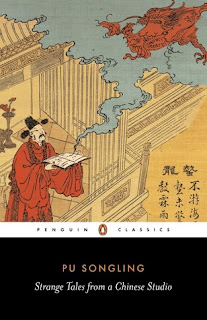 Pu Songling (1640-1715) was a Chinese Confucian scholar who amassed a huge collection of tales generally known as Strange Tales from a Chinese Studio. The tales were gathered together from various sources, some were based on personal experience, some were traditional folk tales. The collection is an assortment of ghost stories, weird tales and stories that are just plain odd. The collection circulated widely during the author’s lifetime but was not published until the mid-18th century. These stores have formed the basis for quite a few movies (including The Enchanted Ghost).

There have been a number of English translations. The Penguin Classics edition include about a hundred out of the five hundred stories in the original collection.

Pu Songling had the true collector’s mindset. He was obviously a man who just loved collecting any kind of weird stories that he could find. He was not specifically setting out to collect horror stories. He just loved anything with a hint of the strange or the eccentric or the outré. Some are not much more than a couple of paragraphs describing some inexplicable event or someone’s odd habit (such as the man who eats rocks). Some are fully developed and fairly complex short stories. Some of the stories are tragic, some are ironic, some are comic. Some of these tales are macabre or even gruesome and some are erotic (and even extremely kinky). The sheer variety of subject matter is quite extraordinary.

Some of the stories were already very ancient when Pu Songling collected them, some were contemporary, some were based on first-hand accounts by acquaintances.

Some of the stories (such as Living Dead) can be regarded as genuine tales of horror. Some, such as Talking Pupils (the pupils in question being the pupils of a man’s eyes) are extremely bizarre. Others, such as An Otherworldly Examination and Friendship Beyond the Grave, are ghostly stories of a sort but not in any way horror stories. The Painted Wall is a particularly good story. A man is entranced by a maiden in a painting and then finds himself entering the world of the painting.

Some of the stories are quite dark, some are whimsical (such as the very clever Stealing a Peach which concerns an ingenious illusionist). Growing Pears is similar but this time it’s a mischievous monk getting up to various tricks. Monks figure in quite a few stories and it can be a mistake to be too trusting where monks are concerned, as the protagonist in The Taoist Priest of Mount Lao finds out when he goes seeking wisdom. Taoist priests seem to be particularly versed in the black arts. There are also wicked fortune-tellers (as in the story Magical Arts).

The ghost stories are often quite different in tone compared to European ghost stories. In China ghosts and spirits are not necessarily sinister or frightening. The supernatural stories can also seem rather unconventional (such as The Monk of Changqing which concerns souls migrating from one body to another).

There are numerous stories about fox-spirits, apparently a very big thing in Chinese folklore. They’re a bit like werewolves in that they can appear as humans or foxes. They’re a little bit like fairies in that they seem to sometimes inhabit our world and sometimes their own world. A fox-spirit can also be like a succubus (a female demon who has sex with men and slowly destroys those men) or an incubus (a male demon who has sex with women and slowly destroys those women). Where they differ from western folklore is that while they can be deadly they are not always malevolent. The Merchant’s Son, Grace and Pine, The Laughing Girl and Fox Enchantment are notable examples of very fine fox-spirit stories in which the foxes can be evil or benign or sympathetic or ambiguous.

Both fox-spirits and ghosts can be ambiguous. Both can be dangerous, both can kill, but both can be virtuous and moral. They can even be all those things at the same time, as in Lotus Fragrance (another excellent story).

There’s one story (Coral) about one of the Heavenly Asparas or flower fairies banished to Earth for being too worldly. She falls in love with a mortal man, but it’s hardly a conventional love.

The longer stories are the most interesting (and are likely to be more accessible for western reader). There’s plenty of enjoyment to be had here but there’s more to these stories than just entertainment. There are fascinating insights into the three great Chinese religious traditions (Confucianism, Buddhism and Taoism). There are even more fascinating glimpses into Chinese folklore and the social and sexual mores of Imperial China. If you have a taste for the truly strange and the truly exotic this may be the book for you.
I’ve reviewed the 1970 Shaw Brothers movie The Enchanting Ghost, based on the Pu Songling story The Bookworm.
Posted by dfordoom at 12:43 AM