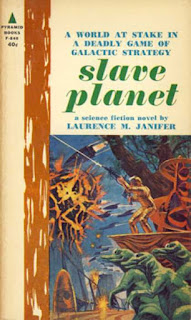 Laurence M. Janifer (1933-2002) was an American writer of science fiction, under his name and a number of pseudonyms.

The slave planet of the title is Fruyling’s World. At some unspecified date in the future humans have colonised Mars and the Moon, and at a later date a planet known as Fruyling’s World. These four planets comprise the Confederation. Fruyling’s World was already inhabited by intelligent life - smallish vaguely reptilian bipedal creatures the humans have christened the Alberts. No-one seems to be sure how intelligent the Alberts are. They can speak and understand human language and can be trained to perform fairly simple tasks. They may be less intelligent than humans, or they may simply not yet have evolved higher culture.

Fruyling’s World is of interest to humans for one reason - its incredibly valuable deposits of certain rare and essential metals. The planet has been colonised by humans purely as a mining operation and it’s a company planet. Associated Metals runs the planet, at a very tidy profit. One of the reasons it’s so profitable is that it was not necessary to instal expensive machinery to run the mines because there was a much cheaper alternative. That alternative was to use the Alberts as slave labour. The company has managed to keep the nature of its operation secret for a century because the ruling ideology of the Confederation is based on liberal concepts such as freedom. Slavery is not exactly compatible with that ideology and if the people of the Confederation ever found out what was going on on Fruyling’s World there would be outrage, demands for government action and possibly war.

Now the secret has leaked out.

Johnny Dodd is one of the masters (all the humans on Fruyling’s World are masters) and he hates it. But there’s no escape for the slaves or the masters. The company does not allow any of its employees to leave the planet for any reason (for fear they might reveal its secrets).

The most noteworthy thing about the novel is its treatment of slavery as something that dehumanises both slave and master, and its treatment of the effects of guilt. No matter how much they may deny it all the humans on Fruyling’s World feel guilt. They are all of them also in denial - denial about every aspect of their situation. It is an entire society built on a foundation of denial.

Johnny has met a girl to whom he is attracted. Her name is Norma and she works in the Psych section. Poor Johnny doesn’t know much about girls. He has also come to the conclusion that things can’t go on the way they are although he has no clear idea about how things could possibly changed, for the planet or for his own life.

There are also vague stirrings among the Alberts. Obviously things are going to change on Fruyling’s World.

This is also a novel that obviously asks questions about how we would behave if we ever did encounter alien life forms who were culturally and/or technologically much less advanced than ourselves. There’s plenty of science fiction dealing with encounters with more advanced (or equally advanced) alien civilisations but the subject of our behaviour if we clearly had the upper hand in the encounter has been less often explored.

This is actually a surprisingly cynical little book. It’s cynical about human motivations and very cynical about the lies we tell ourselves. In this story there are various points of view but all are based on a denial of reality. Some of the characters know themselves to be cynics. Some think of themselves as idealists. What they have in common is a reluctance to face truths.

Armchair Fiction have issued this novel as part of their series of double-novel paperback editions, paired with Paul W. Fairman’s The Girl Who Loved Death (which is rather good). This series is a cornucopia of very obscure and forgotten but extremely interesting pulp science fiction of the ’50s. I enjoyed The Girl Who Loved Death more but Slave Planet is not without interest.