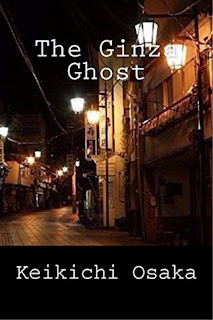 The Ginza Ghost is a collection of short stories by Keikichi Ōsaka (1912-1945), translated by Ho-Ling Wong and published by Locked Room International in 2017. The stories were originally published between 1932 and 1939.

Now I’m totally new to the world of honkaku (Japanese orthodox mystery stories) so you’ll have to forgive me if I display my ignorance of the genre.

Keikichi Ōsaka was one of the honkaku pioneers, working at a time when the writing of such fiction was regarded either with indifference or hostility. His stories attracted limited attention at the time and tragically he died on active service during the war, long before his rediscovery by a new generation of Japanese mystery writers.

The first story in the collection, The Hangman of the Department Store, was published when Ōsaka was just twenty. My impression of his story is that it is more in the Poe-Conan Doyle tradition rather than in the style of the golden age of western detective fiction. It is the first story to feature brilliant amateur detective Kyōsuke Aoyama. An employee of a department store has been murdered and thrown from the roof of the building. Since all the doors were locked the murderer must have been one of the men on night duty in the store.

All the clues that Kyōsuke Aoyama uses to solve the case are presented to the reader at the same time as he discovers them. And the solution is quite ingenious.

The Phantasm of the Stone Wall concerns a murder that occurs in broad daylight in front of eye-witnesses. The evidence against the Akimori twins is overwhelming. The evidence simply cannot be doubted. The problem is that a rookie police constable has spotted something that proves that the eye-witness evidence must be wrong, even though it can’t be. The worst of it is that Constable Hachisuka is convinced that the key witness is not lying. But his evidence must still be wrong. Kyōsuke Aoyama’s scientific knowledge provides the answer to a clever puzzle. A brilliant story.

The Mourning Locomotive is a railway mystery but a very unconventional one. A particular locomotive keeps getting involved in accidents. People keep getting run over by it. Even though nobody holds them in any way responsible the accidents cause great distress to the driver and his assistant. They cope with this by hanging a wreath in the cab, for the prescribed mourning period, each time such an accident occurs. Then a new series of accidents occur, and this time the victims are pigs. He railway investigator, Mr Katayama, notes that the circumstances of the pigs’ deaths are very unusual. He is determined to unravel the mystery. He seems to suspect that a tragedy might be in the offing.

Tragedy does ensue, with an ending that packs an emotional punch. A bizarre story but very effective in its own way (and with some very gruesome touches).

The Monster of the Lighthouse concerns the inexplicable death of a lighthouse keeper, killed by a huge rock thrown through one of the windows of the lantern room. No human being could have hurled such a huge rock. From this and other evidence the only conclusion seems to that a ghost or a monster was responsible. There is no other explanation. Nonetheless the director of the nearby marine laboratory sets out to find a rational explanation.

That explanation is in some ways even more shocking than the supernatural one. Another wonderfully inventive story.

The Phantom Wife appears at first to be a ghost story. This is a technique Ōsaka seems quite fond of. This one is not as elaborately plotted as most of the stories in this collection. It’s OK, but not a great story.
The Mesmerising Light is a relatively straightforward story complicated by some very clever twists. A speeding coupé knocks down an old man. The incident is witnessed by a distinguished criminal lawyer travelling in another car. The coupé disappears. Which is impossible. It was travelling on a toll road from which the only exits are at the toll stations and the coupé did not leave by either exit. So you could call this one a “locked-road puzzle” if you like! There’s a murder as well. To the police lieutenant who is called to the scene the identity of the murderer is obvious, except that the obvious answer is not the correct one.
This one might not seem to fair-play but to a Japanese reader in 1936 it would have been since such a reader would have been aware of a couple of Japanese customs that play a crucial part in the solution. Fortunately Ho-Ling Wong has provided footnotes that make things clear. It’s the kind of story I love - the twists are simple but they’re fiendishly simple. It’s a great story.
The Cold Night’s Clearing is a Christmas story, but a grim one. A schoolteacher has been sent away to act as a relief teacher in another town, leaving his wife and child in the care of the wife’s cousin. Tragedy strikes. Another teacher, Mr Tabei, who lives nearby unravels the mystery. The solution to the whodunit question is obvious from the start. The interest of the story derives from the way Mr Tabei pieces together the story of the tragic events. There’s some clever stuff about tracks in the snow. A reasonably good story in many ways but it just doesn’t quite work for me because of the weakness of the whodunit aspect.
The Three Madmen is both weird and grisly. A small private mental hospital has only three patients. There is a murder and all three patients are missing. The explanation is obvious if rather bizarre but there are some strange plot twists yet to come. Once the first major plot twist is revealed the other twists are more or less inevitable. It’s both a detective story and a horror story although it’s not really wholly satisfactory as a detective story.

The Guardian of the Lighthouse is another lighthouse mystery. A young man named Maayoshi is left alone in charge of a lighthouse. His father and the other lighthouse personnel are supposed to be away for just a few hours but due to bad weather the young man is left alone for more than a day and a night. The light is still flashing regularly so obviously everything is under control although the father is worried. On returning to the lighthouse they find no trace of Masayoshi. No trace at all. Once again the solution to the mystery is both bizarre and original. It’s one of the stories that packs the biggest emotional punch. A very good story.

The Demon in the Mine takes place in the Takiguchi coal mine located near the sea. Both men and women work in the mine. The one thing that all miners fear occurs - a fire breaks out. The fire door is closed and the fire is contained within one part of the mine but one miner, Minekichi, does not make it out in time. The door is sealed before he can escape. Then the murders start. The motive appears to be revenge. But none of the people with motives for revenge could possibly have committed the murders. And there’s a fascinating variation on the perennially popular locked-room problem - a dead body that escapes from a sealed tunnel.
Engineer Kikuchi has to race against time to find the solution. The solution is clever, the locked-room puzzle is quite good, there are unbreakable alibis, there’s an ingenious motive, there’s a superbly claustrophobic atmosphere, there’s fear and there’s suspense. This story has everything. Ōsaka combines these ingredients with complete mastery. It’s brilliant stuff.
The Hungry Letter-Box is the odd man out in this collection, being a rather whimsical tale of a young barber in love. There is however a mystery to be solved - a love letter that disappears. It’s an amusing lighthearted tale.
The Ginza Ghost employs an idea that Ōsaka seems to be quite fond of - eyewitnesses who are truthful but whose testimony is misleading. A young woman is murdered. The most likely suspect by far was already dead herself at the time of the murder. But she’s still the most likely suspect. Another great story.

TomCat’s very favourable review at Beneath the Stains of Time was enough to convince me to buy this one. And I’m inclined to agree with him that the stories do have something in common with Jacques Futrelle’s wonderful Thinking Machine stories. And JJ at The Invisible Event liked this collection as well.
If you’re expecting this collection to be just golden age detective fiction with Japanese settings you’re in for a surprise. These stories have a unique flavour of their own. They’re closer in feel to weird fiction but they have plenty of actual detecting. Highly recommended.
Posted by dfordoom at 11:24 PM