The Girl Who Loved Death 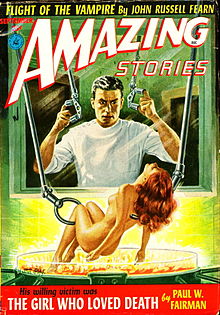 The Girl Who Loved Death is a science fiction novella by Paul W. Fairman, originally published in Amazing Stories in 1952.

Paul W. Fairman (1909-1977) was an American science fiction writer who also wrote under the pseudonym Ivar Jorgensen. He was the founding editor of the science fiction pulp If. He started his career in the late 1940s writing detective stories. Several of his novels and stories were adapted for film and television. He may be largely forgotten today but in his lifetime he achieved some modest success.

The Girl Who Loved Death starts out like a private eye story. Nick Saturday is a private eye and he’s broke so when his landlord Mike Conlin offers to forego the rent if he takes on a case for him Nick is happy to oblige. Mike is a Korean War vet who’d been engaged to a nice girl but things didn’t work out. Now the girl has disappeared and Mike wants her found.

Nick goes to the girl’s house and walks in on a very strange scene. A woman is sitting on the edge of a bed staring down into a box. The box contains a very life-like doll, two feet tall. Then somebody slugs Nick. When he regains consciousness the woman is still staring into the box but Nick notices something odd. He’s pretty sure that before he was slugged that doll had been naked, and very very life-like indeed down to the smallest anatomical details. Now the doll is wearing a frilly blue dress.

Nick calls a doctor because the woman on the bed seems like she’s catatonic. The doctor has the woman taken to a clinic. Now things start to get strange. The woman disappears and the doctor can’t be found but Nick does find something interesting in a refrigerator. It’s a doll, naked and very life-like. So life-like you’d swear it was no doll.

You will have figured out some of what is going on by now but there are plenty of twists to come. And the science fiction elements become more and more apparent.

Nick Saturday has blundered into something that he doesn’t understand at all and he doesn’t like it. People keep hitting him on the head, which he doesn’t like either. There are lots of things in this case that Nick doesn’t like. Such as the Regal Toy Company. And half-naked blondes who give him the runaround (he has nothing against half-naked blondes but he likes to know what’s going on). He’s also going to feel pretty nervous about opening refrigerators in future.

Nick is your basic down-at-heel private eye, not terribly good at his job but he is stubborn. This is an interesting hardboiled detective-science fiction hybrid story and it has enough cynical one-liners to satisfy fans of the former and enough clever ideas to satisfy science fiction fans. Although this is a genuine science fiction story the hardbouled private eye elements work well.

As for what really is going on, like Nick Saturday you’ll have to find out the secrets hidden behind the walls of the Regal Toy Company for yourself.

Whether you’ll like the ending or not is a matter of taste. I liked it because it wasn’t what I was expecting.
It’s worth mentioning that the cover illustration, unlike so many covers, depicts an actual moment from the story.
Armchair Fiction have issued this novella in their series of double-novel paperback editions, paired with Laurence M. Janifer’s Slave Planet. The series is a veritable treasure trove of obscure (often very obscure or totally forgotten) science fiction of the 1950s.
Posted by dfordoom at 5:22 AM