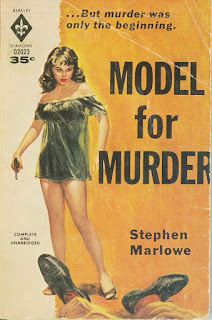 Stephen Marlowe’s Model for Murder was published in 1955. It’s more of a ”reluctant amateur detective” novel than a private eye novel although it certainly has plenty of the hardboiled style.

Milton Lesser (1928-2008) was an American writer known for science fiction as well as mystery novels. He published under numerous pseudonyms, including a successful series of private eye novels as Stephen Marlowe.

Jason Chase has just been released from prison. It should have been his brother Kenneth serving the time but Jason got conned. And while Jason was doing his stretch in the penitentiary Kenneth married Jason’s girl Julia. So Jason is just a teensy bit bitter.

But Jason has Jo-Anne and she’s a sweet girl. Jo-Anne and her roommate Phyllis work for Dr Kincaid at the university. Kincaid is about to publish his monumental study on modern morality in America. It’s going to be more sensational than the Kinsey Report. Kinsey just dealt with sex - Kincaid’s study deals with every imaginable vice from sex to gambling to cheating on income taxes. Kincaid’s study is based on a questionnaire which was filled out by hundreds of people, some of them quite important people. If anyone were to lay their hands on those completed questionnaires they’d have some absolutely dynamite material for blackmail.

And somebody has stolen those questionnaires, murdering poor Phyllis in the process. Jo-Anne blames herself - the questionnaires should never have been in her apartment. It’s pretty awkward for Jason as well. He and Jo-Anne found the body, and he does have a criminal record. It gets worse. The detective assigned to the case is Lieutenant Grujdzak, Kenneth Chase’s father-in-law. Grujdzak hates Jason. Grujdzak is also a moralising prig. Things are bound to get unpleasant for Jason Chase. He figures it might be wise to do a bit of investigating himself. He sure as hell doesn’t trust Grujdzak to conduct a fair or honest investigation.

Jason’s first tentative steps in the investigating business lead him to cheesecake and scandal magazine publisher Wilson Wompler. Jason is rather surprised by the identity of one of Wompler’s models. Getting information out of the publisher isn’t easy because Wompler has a bodyguard, a lady wrestler named Audrey.

Jason has other problems. His sister-in-law Julia is a lush and a nymphomaniac and she’s determined to get Jason into bed. Her sister has the same idea. Jason has a lot of troublesome dames to deal with. Jo-Anne is causing him problems of a different sort. Maybe he can get some help from a private eye named Barrett. Barrett works for Kenneth Chase. What’s surprising about Barrett is not what he knows, but what he should know but doesn’t. There’s also a matter of blackmail, but it’s blackmail that just makes no sense.

The corpses mount up but that just makes Jason more determined. By now he has a real personal stake in this affair and in any case he’s in so deep he just has to keep going.

Jason Chase has very little going for him as a detective, other than the fact that he’s a guy who just doesn’t give up. And he has guts. He’s no choirboy but he’s basically an OK guy.

There’s lots of gunplay (with machine guns) and lots of killings (and pretty brutal killings) and there lots of sex-crazed women. It sounds like a story that could have been given a tongue-in-cheek treatment but Marlowe plays it pretty straight and very hardboiled.

While Marlowe avoids any kind of graphic sex but the entire story is pretty thoroughly permeated with sex and sleaze. And corruption and violence. And cruelty.

There’s also a decent mystery plot. And plenty of action.

If you like your crime fiction extra pulpy this could well be right up your alley. It’s fair to say that it’s representative of the Mickey Spillane school of crime writing. Highly recommended.

The good news is that Wildside Press’s paperback reissue is readily available. I liked it enough that I’ll probably check out some of his Chester Drum novels - the idea of a globe-trotting private eye who gets involved in espionage as well as crime sounds pretty appealing.
Posted by dfordoom at 7:22 AM