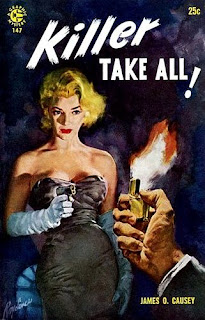 California-born James O. Causey (1924-2003) had a brief but interesting literary career. He wrote for Weird Tales in the 40s, then wrote quite a bit of science fiction. Then in the late 50s he turned out three successful noir crime novels. And then he just pretty much stopped and wrote virtually nothing for the remaining 40-odd years of his life. The first of his noir novels was Killer Take All! which came out in 1957.

Tony Pearson thought he was going to be a champion golfer but after a few months on the tournament circuit he had to face the fact that he just wasn’t good enough. Now he’s assistant pro at a golf club. He has a short temper and plenty of self-pity. Then he runs into Fern Davis on the fairway. A year ago he and Ferm were hopelessly in love and planning to get married but then she married somebody else, a guy called Steve Locke.

Locke works for Max Baird, an ex-gangster trying desperately to be respectable. Max bought himself a country club and a beautiful wife, paying cash for both. The country club is real nice. The wife is a tramp. Now, through a series of accidents, Tony finds himself working for Max. And Tony plays a game of chess and loses, which should have given him the clue but it didn’t.

So what are the things you want in a noir pulp novel and does this one have them? First you want a clever vicious bad guy. This one has that ingredient. You want tough guys. They’re here too. You want beautiful no-good dames. Well it has more than one of those. And you want a nasty twisted plot. Killer Take All! has that too.

Tony Pearson isn’t dumb but he isn’t the smartest guy in the world either. He puts the pieces of the puzzle together but he puts them together wrongly. Then he has another go at making sense of what is happening. He’s wrong again but he has to keep trying. Which he does. And while he’s plucky he’s not much good at fist fights. Or gun fights. What he does have is desperation. If he can’t find the right answer there’s a gas chamber at San Quentin waiting for him. That’s a pretty big incentive to keep trying and not give up.

Then there’s the girl, Fern. He’s pretty sure he can’t trust her but then he thinks that maybe he can, but then again maybe he can’t. She might be in love with him, or with Steve, or with neither, or both. Val is definitely untrustworthy, or maybe she isn’t.

There’s also the matter of a certain painting by Rembrandt, plus there are multiple gangsters.

There’s a fair amount of sleaze. There are the no-good dames who could turn up in anyone’s bed. Then there are the goings-on at the Lee Shore Hotel. No matter what your sexual tastes might be you can indulge them there. The corruption of the police is taken for granted. Tony certainly isn’t dumb enough to trust the cops.

Killer Take All! ticks all the right noir boxes, the pacing is frenetic and the noir atmosphere is laid on with a trowel. It’s tightly constructed, it’s dark and paranoid and it’s very entertaining pulpy fun. Highly recommended.
Posted by dfordoom at 5:13 AM