G-8 and his Battle Aces #1 The Bat Staffel 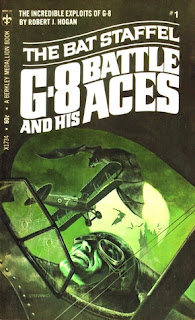 Robert J. Hogan (1897–1963) was an American pulp writer, best known for his aviation adventure stories. He wrote the Red Falcon and Smoke Wade stories for Popular Publications and from 1933 wrote 110 issues of the G-8 and his Battle Aces pulp magazine, each issue including a short novel. Hogan had trailed as a pilot during the First World War so wartime aviation stories were obvious subject matter for him. He also wrote seven Mysterious Wu Fang Yellow Peril pulp novels and later turned to westerns.

The Bat Staffel was the first of the G-8 and his Battle Aces novels. The hero is an American aviator and spy code-named G-8. There’s plenty of air combat (with G-8 almost single-handedly winning the air war) but there are some mild science fiction elements and hints of the occult and the supernatural although Hogan’s novel is not as outrageous (or as imaginative) as Donald Keyhoe’s roughly contemporary stories about Captain Philip Strange, the Brain-Devil.

There’s an evil German mad scientist, Herr Doctor Kreuger, who has come across mediæval legends of giant bats spreading death and destruction across the countryside with their poisonous bat breath. He decides that those giant bats will fly again, devastating France and allowing Germany to win the war. G-8’s job is to discover whether these giant bats are actual bats or ingenious machines, and to find a way to stop them.

G-8 gets some help from two heroic American flyers, Nippy Weston and Bull Martin. This gives G-8 the opportunity to explain crucial plot points to his side-kicks. In the process they shoot down most of the Imperial German Air Force. What chance do fifty Fokkers have against three Americans in their trusty Spads?

Hogan resorts to quite a few standard pulp plot devices. The chief villain, instead of doing the sensible thing and just shooting G-8 out of hand as a spy, carefully explains all the details of his master plan to him first and then of course G-8 escapes. Pulp villains just never learn not to do that. And the Germans just don’t seem to be able to tie up prisoners in such a way that they cannot escape. Of course it goes without saying that the Germans are all lousy shots, whether in the air or on the ground while G-8 and his buddies rarely miss. The Germans are all either evil or they’re fools. But of course this is what the pulp readership expected and wanted. Hogan understand his market.

The bats and their poison bat breath are a nicely sinister touch. The bats are almost impossible to destroy which makes them a suitably terrifying menace.

Hogan certainly knew how to pace a pulp story. This one hits the ground running and the action don’t let up. There are no romantic sub-plots to distract from the action (the readership of such tales was not going to want any soppy romance stuff). There’s no characterisation to speak of. G-8 is a square-jawed all-American action hero. The villain  is pure evil and degeneracy personified.

There are some plot holes but it’s pulp fiction and it’s fast-moving and the readers were unlikely to notice such details.

It might seem like I’m damning The Bat Staffel with faint praise but it’s actually pretty good fun. This is pulp fiction that is very very pulpy. As First World War aviation adventures go it’s not as good as Donald Keyhoe’s Strange War or The Vanished Legion but it’s still quite enjoyable and if you like air combat stories with a few hints of science fiction and weird fiction then I’d recommend it.

Adventure House have republished The Bat Staffel as well as quite a few of the other G-8 and his Battle Aces novels. Their edition also includes a short story by R. Sidney Bowen, The Floating Runt (which has been included in the original pulp magazine as well). It’s a rather contrived story about the rivalry between a pilot and a balloon observer. It's not great but since it's essentially a free added extra it would be churlish to complain too much.
Posted by dfordoom at 9:50 AM