Mysterious Wu Fang #1 The Case of the Six Coffins 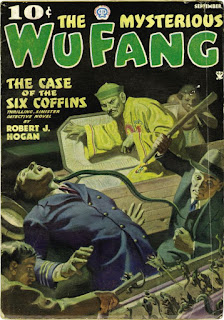 The Case of the Six Coffins was the first of the seven pulp novels written by Robert J. Hogan in 1935 and 1936 and published in the pulp magazine Mysterious Wu Fang.

Robert J. Hogan (1897-1963) was an American pulp writer who specialised in aviation adventure tales (such as the Smoke Wade stories). Mysterious Wu Fang seems to have been his only foray into the Yellow Peril genre.

The story opens with mass murder on a modest scale, and with hints that this is just the beginning. Wu Fang is responsible but it is obviously just a part of a much larger plan. It has something to do with a small bottle of colourless liquid and a torn note.

Ace reporter Jerry Hazard is aboard the SS Bergenland en route for New York when he strikes up a friendship with Val Kildare. Kildare is a Federal agent and for several years now he has been devoting himself to the pursuit of the world’s most dangerous man, Wu Fang.

Also aboard the ship is a stunningly beautiful girl. Jerry Hazard has lost his head over her already.

It soon becomes apparent that while Val Kildare thought he was hunting Wu Fang at the moment it’s very much the situation that Wu Fang is hunting Kildare. And he’s hunting Jerry Hazard as well. There’s also a Scotland Yard man on board but he’s just another hunted animal in this game.

Wu Fang is aboard the ship and he has a plentiful supply of his killers on hand. Some of his killers are human. Most are not. Most are animals but they’re not animals that exist in the natural world. They are fiendish freakish creatures that have been bred not just to kill, but to kill in as terrifying a manner as possible. This is partly to gratify Wu Fang’s taste for cruelty but it’s also a matter of policy. Terror is a very useful weapon to Wu Fang.

I’m exceptionally fond of mysteries and thriller with shipboard settings. And The Case of the Six Coffins makes extremely good use of this setting.

Wu Fang certainly does have a plan and he has a deadly super-weapon. The lives of millions are at stake. Wu Fang has no scruples about killing a few million innocent bystanders. The events on board the ocean liner seem to be moving towards a thrilling action climax and that’s what we get but the story is far from over. And there is plenty of action still to come.

Val Kildare is a straightforward square-jawed hero. As a hero he certainly gets the job done. Jerry Hazard is a shrewd and gutsy reporter and he makes a useful sidekick.

Wu Fang is of course yet another Dr Fu Manchu clone. He lacks the complexity of Fu Manchu, and the surprising touches of honour and even sportsmanship. Wu Fang is just a straightforward monster. He’s your standard diabolical criminal mastermind. It has to be said though that he is an effectively frightening villain and for much of the story it’s Wu Fang who seems to hold all the high cards.

Compared to Sax Rohmer’s Dr Fu Manchu stories this is just a lurid pulp thriller. Rohmer’s stories involve a fascinating clash between civilisations with the West having the edge in some areas and the East being ahead in other ways. This gives the stories something of an epic quality. Wu Fang just wants power. He’s a lot less interesting. On the other hand, as lurid pulp thrillers go, this one has plenty of high-octane excitement and it has pleasingly breakneck pacing and it has some genuine scares. Being aimed at the pulp market it’s a lot more gruesome than Sax Rohmer’s tales and it has much more pronounced horror elements.

Hogan’s prose is basic but it works.

You might be wondering - is it politically correct? The answer to that is simple. No, it ain’t.

Some pulp writers transcended their pulp backgrounds and created woks of surprising power and subtlety. Robert J. Hogan was not one of those writers, and he probably didn’t care (and there’s no reason why he should have cared). The Case of the Six Coffins is just pure unsophisticated pulp fiction fun. Highly recommended.

All seven Mysterious Wu Fang novels have been issued in paperback by Altus Press and they’re readily available.
Posted by dfordoom at 1:56 AM