The Smile of Cheng Su 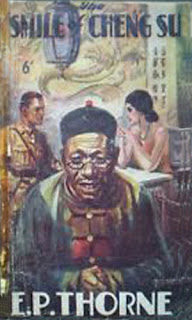 E.P. Thorne’s thriller The Smile of Cheng Su dates from 1946.

E.P. Thorne (1896-1988) is one of those writers who enjoy fairly successful careers during their lifetimes and then disappear completely into oblivion. Thorne wrote at least seventeen mystery/spy thrillers in addition to a considerable number of other books and published them over a span of at least thirty years, which certainly suggests that he was successful enough to encourage him to keep writing. He is now so obscure that all I know about him is that he was English.

Fourteen of his spy thrillers (written between 1946 and 1966) feature Brains Cunningham, an agent for Special Department of the British intelligence services. He investigates a wide variety of crimes and plots. Brains is clearly upper-class and sports a monocle.

The Smile of Cheng Su is the second in the Brains Cunningham series. Although it was published in 1946 the events of the novel take place in September 1939, on the very eve of war.

In the very minor British colony of Saiwei, somewhere in the East, a fisherman is murdered. That’s not so startling but when a senior British police officer is murdered as well the case takes on a distinctly sinister aspect. Brains is despatched to Saiwei to find out what the devil is going on.

On the ship headed for Saiwei Brains gets some hints of at least some of the factors at work in the case. He finds out that there’s a rich businessman named Dimitrios whose activities may well be less than entirely legal. There’s an unsavoury character named Verrier who seems to have an extraordinary passion for oranges. And there’s a ravishing young lady named Daphne. Dimitrios and Verrier will be worth further investigation as they’re obviously up to no good. Daphne will be worth further investigation as well, simply because as far as Brains is concerned ravishing young ladies are always worth investigating.

When he gets to Saiwei he finds some interesting puzzles. Such as the swamp devil. This is of course just a native superstition. Or is it? Brains isn’t convinced. There are all kinds of romantic entanglements which would provide plenty of motives for murder, but those motives unfortunately don’t seem to apply to the actual victims chosen. There’s an English painter who has shocked the local Europeans by shacking up with a native girl and succumbing to the temptations of opium. There’s a luckless young army officer who’s made a fool of himself over both women and gambling. There’s Simone, the glamorous man-eating wife of Dimitrios, who has led a series of men to their ruin.

There’s also an opium-smuggling racket, and possibly other rackets. On the surface Saiwei is a proud little outpost of the British Empire but under the surface there’s a seething ocean of sin and crime. And then there’s Cheng Su, who runs the Mandarin Restaurant, the colony’s m

None of these things would really justify the sending of a secret agent of Brains Cunningham’s calibre to the island but that swamp devil is another matter.

This book seems at first to be merely a mystery novel in an exotic setting. The spy thriller part of the plot doesn’t kick in until late in the book but it is there.

While it was published in 1946 this book has very much the feel of the thrillers of the interwar years. This is an entirely different world from that of the James Bond spy thrillers, the first of which was published just seven years later. Not just different thematically but in style and tone. Cunningham is a gentleman. One could imagine Brains Cunningham lunching with Lord Peter Wimsey at his London club. One could not imagine James Bond doing that.

The background is light years away as well. The Bond novels represented a desperate clinging to the belief that Britain was still a Great Power although both Bond and Ian Fleming knew in their hearts that this was an illusion. The world of The Smile of Cheng Su is a world in which the greatness of the British Empire and the superiority of the British to all other nations is still taken for granted. It is a world of sublime confidence. The British at Saiwei know that Saiwei will remain part of the Empire forever and that the sun will never set on that Empire.

This is a world that by 1946 had already passed away.

Personally I like the thrillers of the interwar years and I find their jingoism amusing. In fact I like them because they take place in a vanished world.

The Smile of Cheng Su is a great deal of fun. Recommended.
Posted by dfordoom at 6:30 AM