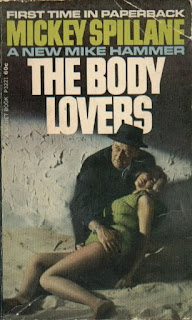 The Body Lovers was the tenth of the Mike Hammer private eye novels, published in 1967. Mickey Spillane (1918-2006) wrote six Mike Hammer novels between 1947 and 1952. Then followed a decade in which he wrote very little of anything. He took up the Mike Hammer series again in 1962.

The Body Lovers begins with Hammer discovering the body of a young woman. Nothing unusual in that. Corpses turn up all the time in New York, and given the rather seedy parts of the city that Hammer is forced to frequent in his line of business it’s not the first one he’s stumbled across. The one notable thing about this one is that the girl appears to have been whipped to death. Still, it’s not Mike’s case so he just calls the cops and doesn’t think about it much.

Then he gets a new client, a guy named Harry Service. Harry’s sister Greta has gone missing and he’s worried about her. Harry is serving a stretch in the penitentiary and Mike was the guy who put him there but Harry is the kind of professional criminal who regards prison as an occupational hazard and he doesn’t hold grudges. In fact he thinks Hammer is a pretty good guy. Harry would never ask the cops for help, but he asks Hammer to find his sister as a favour. Hammer doesn’t owe Harry a thing but in an odd way he’s touched that Harry trusts him.

There will be other bodies in this case. And there will be other girls. Mike is mainly interested in finding Greta but certain events transpire that lead him back to that first dead girl. And there are the négligées. They’re not the sorts of négligées that respectable lady schoolteachers wear, in fact they’re at the kinky end of the nightwear fashion scale,  but a schoolteacher was wearing one rather like the dead girl’s and the schoolteacher is dead as well.

Mike’s buddy, Homicide Captain Pat Chambers, thinks these may be sex murders but Mike has a suspicion there’s more to it than that.

This is an older Mike Hammer compared to the hero of the first six novels. He admits he’s not as quick as he used to be. He’s still just as determined and he still knows how to use his fists (and he’s still not above literally kicking heads).

Velda, his secretary, is still around. Mike still hasn’t married her but she hasn’t given up hope.

Has Mike Hammer mellowed at all? Perhaps a tiny bit, although he always had a certain sensitivity under the brutal exterior. He still has no problem attracting women. He still has no illusions about women but he still has his own odd sense of chivalry. If he senses a certain basic decency in a woman, even if she happens to be a whore, that chivalry kicks in. By 1967 Hammer’s outlook on life was very much out of step with the zeitgeist but he doesn’t care. This may have been the year of the Summer of Love but you wouldn’t know it from reading this book.

In the late 50s and early 50s Spillane’s books were considered to be pretty extreme as far as violence and sleaze were concerned. In the 60s his style hadn’t changed much but by 1967 violence and sleaze were becoming ubiquitous in crime fiction. Spillane still does it with a certain style. Has Spillane mellowed at all? Again, perhaps just a little. He was now middle-aged, very rich and very successful and pretty confident in himself. If critics hated his books he simply didn’t care.

While fifteen to twenty years earlier Spillane was pushing the edge of the envelope when it came to sexual content in crime fiction in 1967 he seems rather coy. Refreshingly so. He’s not interested in describing graphic sex. If characters go to bed together there’s no need to give us a blow-by-blow account.

Spillane also more or less ignores the 1960s. This novel could easily have been written ten years earlier. It seems like a wise decision. When writers try too hard to keep up-to-date the results are usually embarrassing.

The Body Lovers has its share of action and sleaze, it has Mike Hammer still being recognisably Mike Hammer, and it’s great pulpy fun. Recommended.
Posted by dfordoom at 2:53 PM