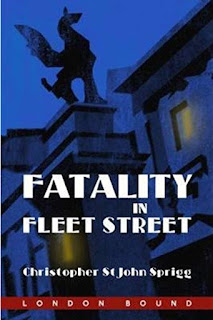 Christopher St. John Sprigg (1907-1937) was an English writer who produced seven detective novels. In the mid-1930s he became an ardent Marxist (and a noted Marxist theoretician) and died fighting for his cause in the Spanish Civil War. Fatality in Fleet Street was his second detective novel and also the second to feature journalist Charles Venables as its amateur crime-solver. It’s a novel that is depressingly relevant today.

Venables works for Lord Carpenter, a media magnate who is unpleasant, dictatorial and megalomaniacal even by the standards of media magnates. For a year Carpenter’s newspapers have been conducting an hysterical propaganda campaign in favour of war with Russia. That campaign is about to reach its apotheosis with a scoop about an alleged Bolshevik atrocity that is guaranteed to drive the Great British Public into a war frenzy. Carpenter boasts that at this moment the only way that war could be stopped would be if someone were to take the Florentine dagger hanging on his office wall and stab him to death with it. Which is exactly what someone does. He is found dead in his office in the Mercury newspaper building.

It’s pretty standard in golden age detective fiction for the victim to be so unpleasant that there are hordes of potential suspects. In this case it’s made more interesting by the fact that the motive could be personal or political. It could be personal because Lord Carpenter was a notorious womaniser. It could be political because most of his staff violently opposed his pro-war policy. The Prime Minister opposed it as well, and he’s a definite suspect.

A lot of the more promising suspects have both personal and political motives for wanting to get rid of Lord Carpenter. It’s even possible that foreign agents may have been involved  so there’s a hint of a spy thriller plot as well.

The political side isn’t handled in a heavy-handed manner. If you didn’t know Sprigg’s history you’d probably guess him to have had anti-war leanings and mild pro-Russian leanings but you probably wouldn’t pick him as someone about to become an ardent Marxist. The actual Bolsheviks who appear in the story are an unsavoury and incompetent lot.

The tone definitely leans towards the farcical. I’m not as big a fan of this sort of thing as some other golden age aficionados but it does have its amusing moments. Sprigg has a certain appealing lightness of touch.

Venables is a fairly typical upper-class amateur detective (he even sports a monocle) and while he’s supremely self-confident (he thinks it’s a fine joke when he gets arrested) he’s not irritating.

Courtroom scenes are not easy to pull off successfully (unless your name is Erle Stanley Gardiner) but Sprigg’s extended courtroom scenes work pretty well. There’s a colourful and devious defence barrister and an amusingly inept judge and there’s the dramatic last-minute surprise evidence.

Of course there’s a romantic sub-plot and it actually ties in (slightly at least) with the main plot. Venables is very keen on the Mercury’s Women’s Page Editor and his romantic future depends on his successful solving of the case.

The solution is one that has been used by other writers but Sprigg adds an additional twist to it to make it more interesting. Even though the solution is somewhat outlandish it is reasonably well supported by some earlier clues so it doesn’t come entirely out of left field. In fact it feels plausible, to the extent that golden age detection solutions are ever really plausible.

A well-plotted very entertaining novel, similar in tone to his slightly later (and equally good) Death of an Airman. Highly recommended.
Posted by dfordoom at 4:33 AM