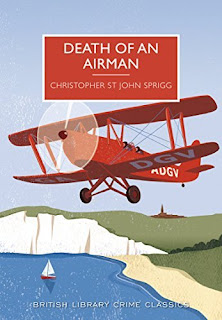 Death of an Airman was the fourth of seven detective novels written by Englishman Christopher St John Sprigg (1907-37). It was published in 1934 and it was well received by critics including Dorothy L. Sayers.

At around the time this novel was published Sprigg was developing what would soon become an all-consuming interest in Marxism. He wrote voluminously on Marxism and in 1936 went off to fight for the cause of communism in the Spanish Civil War. Within a very short space of time at the front he was killed in action.

There isn’t much indication of Sprigg’s growing political convictions in Death of an Airman. He was a man who evidently took his political beliefs very very seriously but the tone of the novel is light and breezy. The central character of the novel is a bishop which is interesting. Sprigg was raised as a Catholic. It was not unusual in those day for devout Catholics to transform themselves into devout Marxists. You might suspect that Spring chose a clergyman as protagonist in order to mock a belief system that he was in the process of abandoning but I can’t find much in the book to support such a notion. The bishop gives the impression of being a decent sort of chap, quite sincere in his religious beliefs, fairly easy-going, quite intelligent and very perceptive. It was not uncommon for doctrinaire Marxists to be doctrinaire atheists as well but I can’t see any evidence here of such sentiments.

The only thing that makes Dr Marriott, Bishop of Cootamundra (he’s an Australian bishop and he’s an Anglican), even slightly unusual is his passion for flying. He has joined the Boston Aero Club to learn to fly. His instructor was to be George Furnace, the club’s chief instructor. Furnace is a very experienced pilot and generally well liked. On the day on which he is to have his first lesson the bishop arrives early. Furnace has taken his aircraft up for a spin, apparently something he often does to clear the mental cobwebs. Much to the horror of those watching from the ground, including the bishop, Furnace’s plane goes into a spin from which it does not recover. Furnace’s body is cut out of the wreck. He was apparently killed instantly. The cause of death is perfectly obvious and there is no need for a post-mortem.

It’s all a bit odd. The aeroplane was regularly serviced and had recently been overhauled and inspected and all the control cables had been renewed. It seems very unlikely that the controls could have jammed. Furnace was such an experienced and cautious pilot that it seems hardly credible that he would have been unable to regain control. And he had recently had a medical examination and was in perfect health so it also seems unlikely that he could have blacked out. Of course there is one possible explanation but Furnace was well liked and no-one wants to consider the possibility of suicide. The inquest naturally brings in a verdict of death by misadventure.

Dr Marriott is however puzzled and a little disturbed. If you’re a clergyman in a remote part of Australia it is useful to have some medical knowledge as well and as part of his preparation for missionary work Dr Marriott undertook a three-year medical course at university. He may not be a qualified physician but he has a pretty fair acquaintance with cases of sudden death and there’s something he noticed when he saw the body not long after the crash. Something that didn’t seem quite right.

This is in fact an impossible crime story, but you won’t know that until you’re well into the book. At first it’s a puzzling death. As more and more evidence comes to light it becomes apparent that George Furnace’s death was quite impossible. The police can come up with no explanation that is consistent with the evidence. The worry with impossible crimes is always that the eventual solution will be a let-down but in this case the solution is both satisfactory and clever.

There are three detectives in this story. Inspector Creighton is the local man in charge but when it becomes apparent that the case has wider ramifications Inspector Bernard Bray of Scotland Yard (one of Sprigg’s regular characters) is called in to assist. And then there’s the bishop, without whose amateur sleuthing none of the facts would have come to light.

There are a lot of lady pilots in this story. Of course if you’re going to do a murder mystery centred on a flying club you’re going to have to find a way to work some female characters into the story so making them aviatrices is logical enough. And in the 1930s lady flyers were quite a big thing. They provided good copy for the newspapers and had definite celebrity status. And aviation provides a glamorous and exciting setting for the story (it helps that Sprigg had an aviation background so he knew his stuff). Sprigg may have been on the road to becoming an ardent communist but in 1934 he certainly had the right commercial instincts when it came to writing his detective novels.

Sprigg’s style is sly and witty and very appealing. There is a great deal of amusement to be had here but he does not allow it to get out of hand. This is primarily a mystery and he certainly does not neglect plotting. The howdunit angle is perhaps more important than the whodunit aspect and it’s fairly clued and nicely devious.

In his introduction to the British Library edition Martin Edwards describes Death of an Airman as an unorthodox whodunit. I must confess that this puzzles me. It struck me as being absolutely orthodox. In fact that’s what makes it so thoroughly enjoyable - it’s an orthodox mystery but it’s executed with immense skill and style. Highly recommended.
Posted by dfordoom at 5:02 AM