Valentine Williams' The Return of Clubfoot 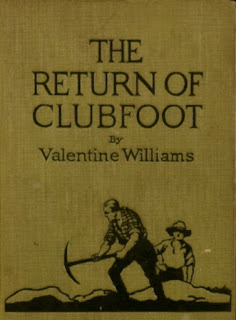 Valentine Williams (1883–1946) was an English thriller writer who enjoyed some success in the interwar period. He is best known for his spy thrillers concerning Dr Adolph Grundt (of which The Return of Clubfoot, published in 1922, is the second). Williams was yet another spy fiction writer who could make some claim to having been a real-life spy. During the Second World War he was briefly employed by MI6 where he made the acquaintance of such notables as Kim Philby.

The opening of The Return of Clubfoot certainly promises high adventure. Major Desmond Okewood, formerly employed by the British Secret Intelligence Service, has retired to a small Central American country where he encounters a broken-down English alcoholic and drug addict who tells a strange story of buried treasure. The treasure is on a small uninhabited island in the Pacific and it’s German wartime treasure.

Okewood wants the treasure but someone else wants it too and they’re prepared to kill to get it. Okewood gets himself invited aboard a luxury yacht belonging to a tycoon who made a fortune during the war. As luck would have it the tycoon has a beautiful and charming daughter, Marjorie. Having reached the island Okewood realises he has no idea where the treasure is hidden although he has some tantalising clues. He also realises that the island isn’t deserted after all - it’s not only full of cut-throats but the cut-throats are led by his old enemy, the German master-spy Dr Adolph Grundt (known as Clubfoot).

Okewood and Marjorie (with whom he has fallen hopelessly in love in a wholesome English way) gets themselves repeatedly captured and have plenty of narrow escapes from both Grundt and from the natural hazards of the island. The island is riddled with caves, which can be places of safety the the hero and heroine but they can also be deadly traps.

Williams’ Germanophobia is deliriously hysterical and is exceeded only by his jingoism. And his political incorrectness is off the scale. All of which makes the book a great deal of fun. Everything about this tale is feverish and breathless. It’s all pretty ridiculous but it is undeniably filled with action and excitement and of course romance as well.

The clues that lead Okewood to the treasure, or at least to the spot where he believes the treasure to be concealed, are ingenious if clichéd.

Clubfoot is a full-blown melodrama villain. He is clever and ruthless and not being an Englishman he is naturally an out-and-out rotter and a sadist. He enjoys torturing Okewood by telling him that he intends to give Marjorie to the most repulsive and cruel of his henchmen (in fact he intends to give her to several of his henchmen) which of course means she will suffer a fate worse than death. Foreigners are lustful enough at the best of times but the sight of Marjorie’s English purity will drive them to a frenzy.

Okewood is a noble hero, not exactly dashing but determined and he’s motivated not just by devotion to God, King and Country but also by the love of a sweet innocent girl. Marjorie, being an Englishwoman, is plucky and spirited (in a pure-hearted way) and perhaps not quite as entirely helpless as Okewood imagines her to be.

It’s completely ludicrous stuff but very amusing (although unintentionally so since Williams appears to have no sense of humour whatsoever) and in its own overheated way The Return of Clubfoot is quite enjoyable stuff. Recommended.

I’ve also reviewed one of the later Clubfoot books, The Crouching Beast.
Posted by dfordoom at 7:18 AM