Erle Stanley Gardner's The Case of the Buried Clock 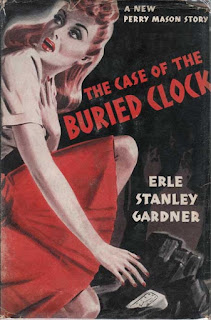 The Case of the Buried Clock is a 1943 Perry Mason novel by Erle Stanley Gardner.

Harley Raymand, recovering from a war wound, is staying at the mountain cabin owned by banker Vincent Blane. Raymond has made a curious discovery. A buried clock. Why would anyone want to bury a clock? And the clock is still running. He also makes another discovery - a dead man in the cabin. The dead man is the husband of Blane’s daughter Millicent. He’s been helping himself to funds from Blane’s bank.

Since Millicent seems likely to strike the local sheriff as an obvious suspect Blane retains Perry Mason’s services. There’s actually a wide choice of suspects. There’s Millicent’s sister Adele, who hated the dead man. There’s a brother and sister, Burt and Lola Strague, and there’s wildlife photographer Rod Beaton. They were all on the scene. As was glamorous widow Myrna Payson.

Perry agreed to take the case because the clock angle intrigued him and he’s even more intrigued when he realises the clock is keeping sidereal time, not solar time. Setting a clock to do that is the kind of thing you’d do if you wanted to track the position of a star. Perry has no idea how that might tie in to the murder but he has a feeling that if he can find the connection he’ll crack the case. Also puzzling is the bullet. There isn’t one. There’s no exit wound so the bullet has to be in the body, but it isn’t. And then there are the tyre prints. And the family doctor who tells an amazing number of lies.

Deputy District Attorney McNair is young, ambitious and arrogant and he has a watertight case. He just can’t lose. If only Mason would stop carrying on about that damned clock.

There’s plenty of misdirection in this tale and Perry Mason (and Paul Drake) fall for quite a lot of it. The solution is more complicated, and more simple, than it appears to be.

Perry gets to express his feelings about police ethics, his view being that the police don’t have any. For their part Paul Drake and Della Street are a bit worried that Perry’s legal ethics seem to encompass everything from concealing witnesses to breaking and entering but when you work for Perry Mason you just have to get used to such things.

Perry likes to set traps for prosecutors to walk into but this time it seems like he may have met his match as he blunders into some very subtle traps laid by Deputy D.A. McNair. A lesser man might have been daunted but this sort of thing just gets Mason more motivated. He’s going to have to be very motivated indeed to win this case. Gardner always handles courtroom scenes with great skill and this book contains enough devious legal manoeuvrings to please fans.

Gardner’s method in the Perry Mason novels was to stick to the very successful formula he’d established but add enough twists to keep things fresh and interesting and in the 40s he was at the top of his game. It seems impossible that he can connect so many bizarre clues into a coherent plot but he does so.

The Case of the Buried Clock is not perhaps in the absolute top tier of Perry Mason stories but it’s still fine entertainment. Highly recommended.

My latest project is to pick the episodes of the 1957-66 TV series based on Erle Stanley Gardner’s novels and read the novel, then watch the TV episode and do parallel reviews of both. My review of The Case of the Buried Clock TV episode can be found here at Cult TV Lounge.
Posted by dfordoom at 5:53 AM