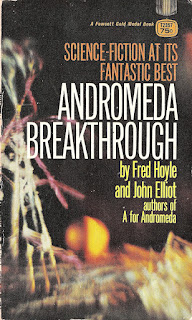 A for Andromeda was one of the most famous science fiction television series of all time, now tragically lost. The follow-up series The Andromeda Breakthrough, broadcast in 1962, does however survive. Both series were co-written by astronomer and science fiction author Sir Fred Hoyle and John Elliot. Novelisations of both series were produced. They were credited to Hoyle and Elliot but seem to have been written mostly by Elliot. It is the novelisation of The Andromeda Breakthrough, published in 1964, with which we are concerned at the moment.

The premise of A for Andromeda is that a message has been received from deep space. The message comprises instructions for building a computer far in advance of anything known on Earth. Once the computer is built it begins to construct something else - a young woman. Is she human or alien? Is she woman or machine? Can she, or the computer, be trusted? What are their intentions? The British Government is terribly excited since this project seems to offer the opportunity to restore Britain’s place in the world.

To the astonishment of the British Government the whole thing goes horribly wrong. As The Andromeda Breakthrough opens scientist Dr John Fleming is on the run with a strange young woman without any memories.

It’s not just the government that is after them. There’s also a sinister international business cartel and the agents of a small Middle Eastern nation.

While there are definite spy thriller elements to A for Andromeda those elements are much more prominent in the sequel, or at least they are in the early stages of the book. The spy thriller stuff is fairly exciting and there’s plenty of cynicism for spy fiction fans who enjoy that sort of thing.

By the halfway stage the hard science fiction elements have kicked in again. And they do represent a further development of the ideas in the first book - the problems of complete mutual incomprehension involved in contact with an alien civilisation, the near impossibility of knowing whether aliens can be trusted, the danger of actions being misinterpreted due to extreme cultural differences, the sheer alienness of the motivations of alien intelligences. The unusual indirect nature of the contact with the aliens is so very indirect exacerbates the difficulties. These are issues that fascinated many science fiction writers but The Andromeda Breakthrough deals with them in a reasonably thoughtful way. The fact that the aliens never actually appear in the story but act at second hand through human agents and an artificial intelligence adds an original twist.

There’s plenty of ambiguity in this tale. It’s not just the uncertainly about the motivations of the aliens and of their partly human creation. The fully human characters are pretty ambiguous as well. Dr Fleming is paranoid and he’s right to be paranoid but maybe he pushes it too far. He thinks he’s being rational but can’t accept that he’s become emotionally entangled. Professor Dawney, the biochemist given the opportunity to create life, is perhaps naïve and is perhaps inclined to allow her scientific excitement to cloud her judgment. The politicians and businessmen who get mixed up in the affair combine unscrupulousness with breathtaking incompetence, greed and foolishness. There’s enough complexity, both moral and philosophical, to keep things interesting and there’s enough action to keep things entertaining.

While The Andromeda Breakthrough, both as a TV series and as a novelisation, is not as highly regarded as A for Andromeda a case can be made that it’s been somewhat underrated. The TV series was released on DVD but it’s very hard to find these days. The novelisation is quite intriguing. Recommended.

My review of A for Andromeda can be found here.
Posted by dfordoom at 8:46 PM