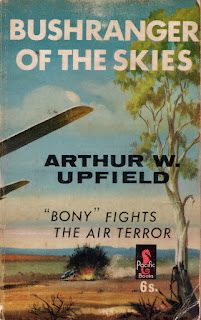 Bushranger of the Skies, later reprinted as No Footprints in the Bush, is a 1940 Detective Inspector Napoleon Bonaparte mystery by Arthur W. Upfield. This time Bony, the half-Aboriginal half-European detective, gets uncomfortably closely involved in a case.

Somewhere in Central Australia Bony is on his way to the McPherson Homestead to deliver a letter to the local police sergeant, a man named Errey. It concerns some odd happenings in the area. While camped about twenty miles from the homestead he sees a dust cloud in the distance. It is obviously a car and since cars and few and far between on this unmade road Bony makes a reasonable guess that it is Sergeant Errey’s car. There’s nothing surprising in any of this. Bony is only mildly surprised when an aircraft appears from the west. He is however very surprised when the aircraft drops a bomb on his camp. He is even more surprised when the aircraft drops two more bombs on Sergeant Errey’s car, reducing it to a blazing wreck. This qualifies as very much more than an odd happening. And Bony is not overly keen on people trying to kill him.

The atmosphere at the McPherson Station is pretty strange. Old McPherson is a crusty character of Scottish extraction. Bony is sure that McPherson has a fair idea of the identity of the pilot of that monoplane but the old man obviously has some secrets he intends to keep to himself.

The usual Upfield formula was to adhere fairly closely to the classic golden age detection template but with an exotic setting somewhere in the Australian Outback and with an exotic detective. Upfield did however vary this formula on occasions, having Bony investigate a case in the big city or as in this book making the story more of a thriller than a tale of detection.

The culprit is a skilled bushman with a hundred and fifty thousands square miles of desolate country in which to hide, and he has allies in a local Aboriginal tribe and they’re even better at simply disappearing into the bush. Even with a team of police and aircraft and trackers it could take months to find the man. Bony, for reasons of his own, decides to do the job alone. He faces a further problem - he’s not the only one hunting this man. And Bony will have to find him first.

The difficulty facing a man like Bony, caught between two cultures and with strong loyalties to both, is a major underlying theme of all the Bony stories but in this novel it takes centre stage. All the central characters in this story are in their own ways in the same position as Bony, caught halfway between cultures. Bony has come to terms with his own situation but the other characters have not.

Upfield’s treatment of these problems might seem old-fashioned but that’s a superficial view. Once you put aside the fact that he uses terms that are now forbidden (such as half-caste) you’ll find that his views on these matters are perceptive and deeply sympathetic. He refuses to idealise either the whites or the Aboriginals or those of mixed race but he is fundamentally sympathetic to all three points of view and he is also fundamentally optimistic. Of course the book was written in a much more optimistic age. Perhaps the tragedy of our own times is the we’ve lost that optimism.

Upfield does perhaps spend too much time telling us what a remarkable chap Bony is and how clever he is, when in fact Bony makes a series of terrible errors and consistently underrates his opponent.

This is a manhunt battle of wills and wits tale. There is no detecting done at all. The suspense also doesn’t quite come off. The far-fetched and rather outrageous plot is the sort of thing that a Leslie Charteris could have pulled off effortlessly. Upfield doesn’t quite manage to bring it off. He doesn’t quite convince us to believe in the story, or in the villain. And Bony is not the Saint. He’s the wrong hero for this kind of tale.

One interesting aspect to the story is the assumption that the magic of Aboriginal magic men really does work. Bony believes it works and it’s pretty clear that Upfield expects the reader to believe it too. This is therefore a crime story with actual supernatural elements or at least paranormal elements. That’s a problem given that the the plot already stretches credibility to breaking point. There’s nothing wrong with supernatural thrillers but in this case the supernatural elements weaken the story.

Bushranger of the Skies is really not a success. There are much better Bony novels out there, such as the excellent Wings Above the Diamantina. This one is for Upfield completists only.
Posted by dfordoom at 7:15 PM