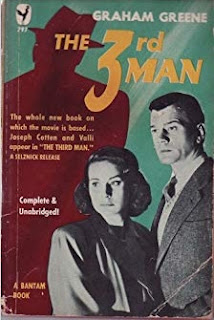 The genesis of Graham Greene’s The Third Man is rather interesting. In 1948 The Fallen Idol, directed by Carol Reed and written by Graham Greene, had been very successful at the box office. Since it also proved to be a happy collaboration it’s no surprise that Reed and Greene were anxious to do another movie together. That movie would eventually become The Third Man, one of the greatest movies ever made. But at the time he agreed to do the film Greene had only a single sentence scrawled on the back of an envelope - the mere germ of an idea about a man who is surprised to see an old friend named Harry Lime pass him in the street - surprised because he’d attended Harry’s funeral a few days earlier.

Greene was an excellent screenwriter but felt that he could not write a totally original screenplay. He preferred to adapt one of his stories or novels. Since in this case he had no story to adapt he would have to write one. So he sat down and wrote a story. Now he had something on which to base a screenplay. The story (a bit more than novella length) was never intended to be published. It was merely a quarry from which he would mine the materials for his screenplay. When the film was released in 1949, to international acclaim, his publishers persuaded him to allow the novella to be published.

It is of course essentially a first draft of a story. The completed screenplay differed from the novella in a number of ways. In his preface Greene is at pains to point out that the changes were not forced upon him. Once he sat down to write the screenplay he realised that some changes would be needed and he made them. He did not however revise the novella, which is what makes it so interesting. You can see the way that Greene’s ideas about the story evolved. The changes are actually not all that great. Greene was naturally a very cinematic writer and most of the scenes in his books lend themselves to film.

But the subtle changes are interesting. In the book the central character is Rollo Martins, an English writer of pulp westerns (the fact that he is an Englishman who has never set foot in America is part of the joke). In the movie he becomes Holly Martins, an American writer of pulp westerns. The Rollo Martins of the book is in some ways even more of a failure in life than the film’s Holly Martins, although perhaps marginally less naïve and marginally less self-righteous.

The only condition producer Alexander Korda imposed on Greene and Reed was that he wanted the background to the film to be the four-power occupation of Vienna (the city being divided into British, French, American and Russian zones). This was no problem - the war-ruined city dominated by corruption, with almost everyone involved in some kind of black market, was ideal Greene territory. This is very much Greeneland.

Many of the most memorable scenes in the movie are here in the novella - the encounter on the Ferris Wheel, the chase through the sewers - and while they’re better in the film they work extremely well on the printed page.

Greene felt that the film was better than the book and he was right but the book is still in its own way classic Greene and it’s still pretty good. When comparing the novella and the movie you always have to keep in mind that the story was right from the start intended to be filmed. The novella is essentially an extended rather literary film treatment. So the set-pieces naturally work better in the movie - Greene was creating scenes that would have more impact on the screen than on the page.

Greene was fascinated by themes of betrayal but it’s interesting that both The Third Man and The Fallen Idol deal specifically with the betrayal of illusions, and our reluctance to believe that our illusions are being betrayed. Even more specifically, they deal with the betrayal of childhood illusions. Harry Lime was the boyhood idol of Rollo/Holly Martins. Letting go of the illusions of childhood is part of growing up so logically Martins should finally grow up when he realises that his hero is a fraud and a monster. But this is a Graham Greene story so things are not necessarily going to work out so neatly. Nothing works out neatly in Greeneland.

The Third Man was published in an edition that also included the short story The Basement Room on which the film The Fallen Idol was based. My review of the film version of The Third Man can be found at Classic Movie Ramblings.

The Third Man is essential reading for fans of the film and for Graham Greene fans. Highly recommended.