Rex Stout’s Over My Dead Body 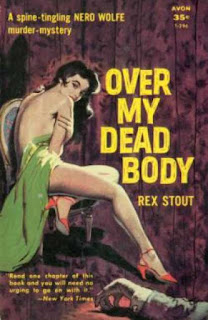 Over My Dead Body was the seventh of Rex Stout’s Nero Wolfe mysteries. It was published in 1940.

A young woman, apparently from Montenegro, wants Wolfe to represent another young Montenegrin woman accused of stealing some diamonds. For some reason (which we will soon discover) Wolfe has a horror of anything remotely connected to the Balkans. He wants nothing to do with the case. Until he is informed of a certain fact which makes it impossible for him not to become involved.

The woman accused of the theft, Neya Tormic, is provided with an alibi in circumstances which occasion a good deal of surprise and even scepticism on the part of Wolfe and Archie Goodwin.

The first murder occurs soon thereafter. It won’t be the last.

The big question is why a British spy should be mixed up in all this. And a German spy as well. And why are the Feds so interested? Wolfe and Archie are not accustomed to G-men taking an interest in their case and they’re not very happy about it. Inspector Cramer of the Homicide Bureau is even less fond of the FBI and even less happy. Unfortunately, or perhaps fortunately, the G-men appear not to have a clue what they’re doing and as the tale unfolds they become steadily more ineffectual and bewildered.

And it’s not just spies. There’s a princess involved as well, and princesses are even more worrying than spies.

So this is a political thriller of sorts as well as a murder mystery. Fortunately Wolfe resists the temptation to focus too much on the political aspects. The Balkan angle adds colour and a touch of exoticism rather than being an excuse to belabour us with political lectures. Although Wolfe does display a vast contempt for bankers and international financiers.

In this book we find out some very surprising things about Wolfe’s past. It’s more than a little disconcerting to think of Wolfe as a father. Which he is. Possibly. In a way.

There’s nothing startling about the murder methods employed in this novel (even if one takes place in a fencing academy). There’s certainly nothing remotely impossible about any of the crimes. Alibis play a comparatively minor rôle. The motives are more important than the method. Indeed, the motives behind the alibis are more important than the alibis. Stout is often disparaged for his plotting abilities. He was certainly no Freeman Wills Crofts but he was actually quite competent in that area and the plot in this case is perfectly serviceable. In fact it’s quite good.

I’m more and more struck by the similarities between Nero Wolfe and Perry Mason. Both are willing to play fast and loose with legal niceties to protect the interests of their clients, even to the extent of concealing witnesses and concealing vital information from the police. They’re both fundamentally honest and they’re carful not to do anything actually illegal but both are aware that the odds are stacked against the individual so that it’s necessary for both an attorney and a private detective to take steps to protect a client from the overwhelming power of the police and the legal system.

Archie Goodwin is in fine form, relishing the various opportunities the case offers to hoodwink the police. And he gets to slug a witness which he enjoys very much indeed.

Over My Dead Body offers a decent plot, intriguing revelations about Nero Wolfe, international intrigue, sparkling dialogue and plenty of fun. Not the best of the Nero Wolfe mysteries but still extremely good. Highly recommended.
Posted by dfordoom at 10:32 PM