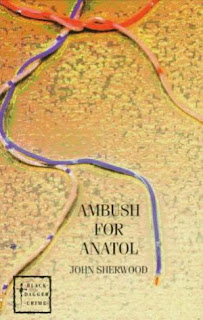 Ambush for Anatol was the third of John Sherwood’s five spy thrillers featuring Charles Blessington. It was published in 1952 (and in the United States the title was changed to Murder of a Mistress).

John Sherwood (1913-2002) was an amazingly obscure if moderately prolific writer. He wrote a series of cozy mysteries with a horticultural theme and he also wrote the five Mr Blessington espionage thrillers between 1949 and 1954. I assume he was English but I know so little about him that I cannot even be absolutely certain that the author of the Celia Grant cozy mysteries and the author of the Mr Blessington spy thrillers are one and the same man.

Ambush for Anatol begins with a fairly sizeable cast of characters spending Bank Holiday Monday on Hampstead Heath. Philip and Diana Abinger are slowly subsiding into genteel poverty. Philip was an RAF fighter pilot during the war but since then he has been unable to make a go of anything. Now he thinks his luck may have changed. He ran into a Polish count with whom he had served in the RAF. Count Jan Piatovsky has some mysterious financial scheme going and although Philip has his doubts as to whether it’s likely to be strictly legal he’s desperate enough to try anything. Piatovsky and his common law wife are also on the Heath on the fatal day. As is the formidable but unpleasant Lady Bernberg. Everyone seems to be there to meet Anatol. The result is a double murder.

As it happens Mr Blessington has already become aware of other aspects of this case. Mr Blessington is a treasury official and one of his jobs is to prevent evasions of the British Government’s extraordinarily strict foreign currency regulations. He suspects that someone has cooked up an entirely new and ingenious means of circumventing the regulations and he’s pretty sure that it’s connected with this double murder. He decides that it would be advisable to have a word with Inspector Lunt at Scotland Yard.

What one really hopes for in a thriller of this vintage is a “murder and mayhem on a train” angle and if the train senes happen on the Continent that’s even better. Ambush for Anatol not only delivers this it also has a “danger in the skies” angle as well. The action moves from London to Paris and then the French Riviera.

One of the most interesting things about this novel is its depiction of the dreary and depressing world of Britain in the period of postwar austerity. Years after having supposedly won the war Britain feels more like a defeated nation, with rationing still in force and with an economy in ruins. It was a miserable world for the working class but it was also a demoralising world for the middle and upper middle classes. Philip and Diana Abinger were typical of countless middle class people who were just barely managing to keep their heads above water. It was obviously a world in which people could easily convince themselves that things like smuggling and financial crimes were not really crimes. While this novel does not descend into tedious social commentary there are some genuinely intriguing social elements. The people who have become involved in this conspiracy are people who would certainly never have involved themselves in such desperate adventures in pre-war days.

While it was published in the same year that the first of Ian Fleming’s Bond novels appeared Ambush for Anatol belongs to a more genteel era of spy fiction. It’s not wildly dissimilar in tone to Victor Canning’s Panther’s Moon. In this era of British spy fiction novels featuring professional spies were still slightly unusual. Ambush for Anatol is a bit of a hybrid. It has the innocents caught up in espionage angle but there’s a professional spy hero as well. Mr Blessington is not quite a professional spy in the James Bond mould and he’s certainly not a conventional action, he is a professional spy of sorts. It’s clear that his work for the Treasury is not confined to shuffling papers in an office.

Mr Blessington looks like a typical civil servant. He is middle aged, bespectacled and rather overweight. He is however more than a mere civil servant. His razor-sharp mind makes him extremely dangerous and he can be breathtakingly ruthless when the occasion demands it. He carries a gun and he’s quite prepared to use it. He may remind some readers a little of Edgar Wallace’s Mr J.G. Reeder, a man who also seemed extraordinarily inoffensive and even slightly ridiculous on the surface but was the terror of Britain’s underworld. All in all Mr Blessington is a rather engaging character.

I’m not going to try to convince you that Ambush for Anatol is an adrenaline-chaged roller-coaster ride of action and excitement but it does have a few reasonably thrilling moments and it’s rather enjoyable. I suppose you could describe it as a cozy spy thriller. Recommended.
Posted by dfordoom at 11:13 PM