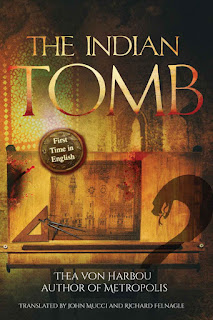 Thea von Harbou (1888-1954) was a German novelist and screenwriter. She was married for a time to Fritz Lang. She wrote the screenplays for all his films from 1920 to 1933, which include some of the greatest cinematic masterpieces of all time so she has some claims to being Germany’s most important screenwriter. She was also a popular novelist and she wrote novelisations of some of the screenplays she wrote for Lang, including Metropolis. She was very much influenced by Karl May, a German writer of adventure stories (including an immense number of westerns). She was a popular commercial writer but judging by this book and by the only other book of hers that I’ve read, Metropolis, she’s a very underrated and under-appreciated writer.

The Indian Tomb was written in 1918 and was a major success. It has been filmed three times, including a late 1950s version by Fritz Lang. It’s only comparatively recently that it’s been made available in an English translation.

The Indian Tomb is the story of a German architect recently recovered from a near-fatal illness who receives an unusual commission. He is told that he must leave immediately for India, he must in fact leave that very night. He knows nothing of the man who has offered him the commission other than the fact that he is immensely wealthy and he wants a tomb for his recent deceased wife. The tomb must be not merely beautiful, it must surpass even the Taj Mahal. The architect is offered a fabulous sum of money but it is the challenge and the opportunity that causes him to accept the commission. This is a chance to build something greater than he has ever built before, something grate than he could ever have imagined building.


He arrives at the prince’s palace, and meets the prince. At first it all seems a bit bewildering but he expected that. And then he finds that the situation is not all what he expected and the job is not what he expected. He cannot do, but he may have no choice. He’s entered a strange nightmare world. The palace is a wonderful creation, a combination of extraordinary beauty and extraordinary horror, filled with wonders and terrors. It’s more like city than a palace, or perhaps a vast prison. If only his beloved wife were there with him. He has heard her voice but of course the was a dream. She is back home in Germany.

The palace is built on an island in a lake. In fact it is the island. The lake has some peculiar properties. Many men have tried to swim the lake. None survived.

There is a very entertaining interlude in the home of the jeweller Mohammed ben Hassan. His home is more like an amazing fortress, filled with unimaginable riches.

If you’re familiar with Metropolis then you’ll know that von Harbou was fascinated by imaginary cities and by strange and sometimes sinister architecture. It’s no accident that the hero of the novel is an architect - perhaps only an architect could survive the prince’s palace, although of course an architect might be particularly susceptible to the madness of the place.

The prince’s motives are mysterious. He offers explanations but Fürbringer has no way of being sure what these explanations mean. They almost certainly don’t mean what they appear to mean.

One of the best things about the book is that von Harbou was fascinated by India but never set foot there. This is an India of the imagination. It’s an amalgam of traveler’s tales, the Arabian Nights, fairy tales and pure fancy. It’s a bit like the Arabian Nights retold by Kafka.

Fürbringer has entered a world in which he knows none of the rules. That’s the main obstacle to escape - where would he escape to? He is in an alien world and he doesn’t even know what to be afraid of.

And once he thinks he’s figured things out he still doesn’t really understand why is going on.

There’s a lot to admire in this book. Unfortunately it has one flaw and it’s a near-fatal flaw. I can’t tell you what it is because it would be a huge spoiler. Interestingly, the ending has similarities to the ending of one of Fritz Lang’s American films, not written by Thea von Harbou.

Despite the flaw it’s an interesting book with lots of exoticism and some great weird sinister atmosphere (the horses are a nice touch but I’m not going to tell you what’s so delightfully and creepily strange about them). So I’d still recommend this book. Metropolis on the other hand is a great book.

Fritz Lang's 1959 movie version of The Indian Tomb, the two-part film known as the Indian Epic, is excellent.
Posted by dfordoom at 11:31 PM