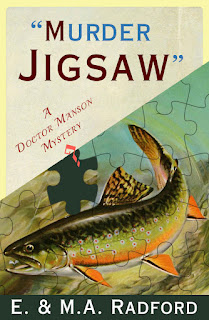 E. and M.A. Radford were an English husband-and-wife writing team. They wrote thirty-eight mysteries, beginning in 1944 and continuing until the early 70s. Most of their books featured Dr Manson who is both a policeman (a Chief-Inspector at Scotland Yard) and a scientist. He presides over the Yard’s scientific laboratory. He is in his early fifties and was apparently recruited by the Yard a few years earlier when they needed to lift their game in the forensic science area. One assumes that he was in effect parachuted into the Chief-Inspector’s position without having ever walked a beat. The intention of the authors was to create a scientific detective on the model of R. Austin Freeman’s Dr Thorndyke but have him be a working policeman rather than just a consultant. Murder Jigsaw was the second of the Dr Manson mysteries, appearing in 1944.

The opening of the book provides yet another example of the folly of fictional detectives in thinking they can enjoy a peaceful holiday. You would think that by now they would realise that within a day or two of arriving at their chosen holiday destination they would be faced with murder. And you can guarantee it will be a murder that the local police will be entirely able to cope with so that the unfortunate vacationing detective will be forced to take over the case.

In this case Dr Manson has chosen Cornwall for his holiday. His choice in this matter never varies. He has a passion for fishing and there’s a particular spot in Cornwall where the fishing is very much to his liking. He always stays at the same hotel and is not only a frequent but also a very well-liked guest.

Not all of the guests are so well-liked. Colonel Donoughmore is very much disliked by all and sundry. And now he is dead, found floating in a rather treacherous part of the river. It is fortunate for the cause of justice that the police officer who just happens to be on the scene, Dr Manson, also happens to be a very experienced fly fisherman. A non-fisherman might well have dismissed the colonel’s death as an accident. But to a keen angler there are several things that seem quite wrong and quite inconsistent with the accident theory. There are certain things that a fisherman simply doesn’t do. It’s all fortunate that Dr Manson invites himself to the post-mortem examination. The local police surgeon has no specialised knowledge of pathology and manages to miss all the vital medical evidence. But Dr Manson does spot those medical clues. The accident theory just won’t do.

There’s an extremely strong focus on the scientific side of things. Dr Manson has with him his Box of Tricks, his suitcase which functions as a portable laboratory (very much like Dr Thorndyke’s portable laboratory). Everything that can possibly be viewed under a microscope gets viewed under Dr Manson’s microscope. There’s an enormous amount of scientific evidence and it’s remarkably clever stuff.

The Radfords do not however rely purely on scientific evidence. Dr Manson is a policeman as well as a scientist. There’s plenty of attention given to alibis. Not are motives neglected.

Dr Manson continually stresses that his method is based on elimination. And in fact that’s perfectly true. There are quite a few suspects and there are quite a few possible scenarios that would explain how the Colonel’s body came to be floating in the River Tamar. The process by which Manson eliminates those scenarios that do not quite fit the facts is nothing short of brilliant. The process by which he eliminates those suspects who could not have killed the Colonel is equally impressive.

And then we get to the ending. To say that the ending is a disappointment is putting it mildly. It is a bitter disappointment. The Radfords prided themselves on playing scrupulously fair. And they do play fair, in a narrow technical sense. There’s no actual cheating. It’s just that the reader is left feeling that somehow he has been cheated.

There is a great deal to admire in this novel. Dr Manson pulls off some dazzling pieces of logical reasoning. The scientific evidence is both clever and enthralling. There are also fascinating items of fishing lore. The setting is excellent. I also love the fact that there is absolutely no mention of the war - I detest wartime mysteries. Everything is done so well. Except for that ending.

Up until the final revelation I was expecting to be recommending Murder Jigsaw very highly indeed. As it is, it’s still recommended but with some serious reservations.
Posted by dfordoom at 10:58 PM