Vernon Loder's The Mystery at Stowe 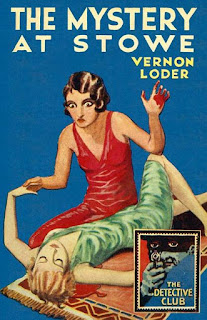 John George Hazlette Vahey (1881-1938) was a prolific Belfast-born writer who penned twenty-two mystery novels under his own name between 1928 and his untimely death in 1938. He also wrote many titles under a variety of pseudonyms. He has languished in obscurity since his death although in the past few years he has started to attract some favourable critical attention.

The Mystery at Stowe was the first of the detective novels published under the Vernon Loder pseudonym. It was re-issued by Collins Crime Club a couple of years ago and is, sadly, the only Vernon Loder novel that is readily obtainable (although I believe at least one other title is forthcoming from Collins Crime Club).

The Mystery at Stowe is on the surface very much a stock-standard country house murder mystery. Mr Barley is a reasonably wealthy and quite respectable sort of fellow who owns the old manor house at Stowe. He has a full complement of house guests. There is some tension. Elaine Gurdon is a beautiful and rather glamorous explorer who is currently planning yet another expedition to the depths of the Amazon rainforest or something similar. Her expedition is being partly financed by Ned Tollard. Ned and his wife Margery are also among the house guests. Ned Tollard’s lavish financial backing of Elaine’s explorations has raised some eyebrows and Margery Tollard has taken on the air of a tragic wronged wife. The real problem seems to be that Margery likes artistic things and artistic people while her husband is more from the huntin’ shootin’ and fishin’ school. It’s not hard to imagine that he might prefer the adventurous Elaine Gurdon to his languid and overly arty wife.

Of course there is a murder. And the murder weapon is a blow-gun from Patagonia or some outlandish place like that. In fact the murder weapon would appear to be a blow-gun that was sold by Elaine Gurdon to Mr Barley. And of course, in the finest murder mystery  tradition the poison is suspected to be curare, as used by Amazonian tribesmen and occasionally be English murderers. Except that, as Elaine points out, it can’t be curare. There’s a problem with the freshness of the poison.

While there were a dozen or so people at Stowe House at the time of the murder it soon becomes clear that suspicions are going to be focused on just two people, these being the only ones with any kind of motive.

It takes a while for the hero detective to arrive on the scene but when Jim Carton does put in an appearance he proves to be reasonably interesting. He’a a young man who has spent several years in Africa as an Assistant District Commissioner, a job which involves quite a bit of detective work, albeit in very different surroundings compared to the quiet English countryside. He’s an amateur detective but with semi-professional qualifications. Superintendent Fisher is not inclined to take him seriously until the young man spots a very vital clue that the superintendent had missed entirely. After that the superintendent is much more tolerant of Jim’s detective activities.

Jim is not your cool dispassionate detective who is able to treat crime as an amusing parlour game. He happens to be head-over-heels in love with one of the chief suspects. He’s not even remotely unbiased. In an official police detective his approach would be disgracefully unprofessional but of course he’s doing his sleuthing purely on a private basis. And while his emotional involvement may well be leading him badly astray he’s also in his own way a very astute detective so he may well solve the case anyway. I believe this was Jim Carton’s only appearance in Loder’s books. It’s a pity but then the emotionally very involved detective is probably not a trick you’re going to be able to pull off twice with the same character.

This is also a story with a suspect who is remarkably difficult to help. A suspect who seems quite incapable of realising the extreme danger of their position. The rather fraught and complicated relationship between detective and suspect (complicated by the fact that she may or my not be romantically involved with another man) is as much the focus of the story as the actual puzzle, but the puzzle is still there and it’s fairly effective.

On the whole this is a thoroughly entertaining novel which takes itself just seriously enough to keep it interesting. Loder treats the whole poison dart thing exhaustively as Jim Carton comes up with an extraordinary array of theories as to how it could have been done. There are three things that might turn some readers off. Firstly there’s the emphasis on Jim Carton’s desperate love for Elaine Gurdon. Secondly there’s the fact that his entire investigation is based on his central theory that Elaine must be innocent because he loves her. Thirdly there’s the solution which involves one of those plot elements that tends to enrage certain vintage detective story fans. Personally I thought there was enough energy and enthusiasm to compensate for any minor defects. And as for that controversial plot element, if you’re going to use such a device at least use it skilfully, and Loder uses it very skilfully indeed.

This is a book that seems to produce sharply divided opinions among the golden age detective fiction cognoscenti. John Norris’s glowing review persuaded me to buy this book, but Tomcat’s review of it was considerably less favourable.

With some minor caveats I’m prepared to highly recommended The Mystery at Stowe.
Posted by dfordoom at 5:25 AM