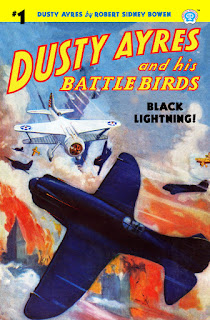 American pulp writer Robert Sidney Bowen (1900-1977) had served with the British Royal Air Force in the First World War. He worked as an aviation journalist and in the 30s he turned to pulp fiction. His first successful creation was Dusty Ayres who featured in the short-lived Popular Publications pulp magazine Dusty Ayres And His Battle Birds.

Black Lightning is the first novel length instalment in the Dusty Ayres saga. Captain Dusty Ayres in a U.S. Air Force pilot in a crack High Speed squadron. He flies the Silver Flash, a highly advanced high speed pursuit fighter which is the only one of its kind.

And now war has finally arrived. The fearsome barbarian hordes, the so-called Black Invaders, have overrun Asia and are now completing their conquest of Europe. Only the United States now remains to defy their power! The Black Invaders are led by the self-styled Emperor of the World, the mysterious man known only as Fire-Eyes.

Dusty Ayres is given a vital mission by X34, the Intelligence chief in Washington. The only safe and secure way to get urgent mobilisation orders to the various area commanders of U.S. forces is by delivering the orders by hand. That’s Dusty’s job. It proves to be far more difficult than expected.

The invaders have been so successful in sweeping through Europe because they undermine their enemies before attacking them, with huge numbers of spies and saboteurs and secret agents preparing the way. These secret agents have already been infiltrated into the United States. In fact the subversive activities on American soil have been on a vast scale, with entire secret underground bases established. High-powered transmitters have been emplaced which will be used to jam all radio communications and paralyse the American defences.

And trying to prevent Ayres from carrying out his mission is the most deadly pilot in the Black Invaders aerial forces, the dreaded Black Hawk.

This first novel in the series is rather vague about the origins of the Black Invaders. Given that they have come out of Central Asia they are presumably a kind of modern version of Genghis Khan’s Mongol hordes, but with very high-tech weaponry. So this is essentially a Yellow Peril tale. It also belongs to the Future War genre, a genre that first emerged at the end of the 19th century. And of course it also belongs to yet another pulp genre, the aviation adventure genre, and it qualifies as science fiction as well. It has pretty much every pulp base covered. 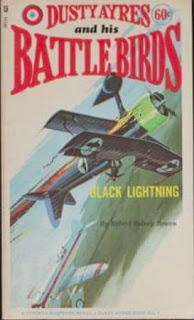 Dusty Ayres is your typical square-jawed Yankee action hero, insanely brave and with unquenchable determination. In this first adventure there are perhaps some slight doubts about his judgment although in his defence it has to be said that he’s put in situations where he has to make split-second decisions based on very incomplete information.

Fire-Eyes is obviously the chief villain, a cross between Genghis Khan and Dr Fu Manchu, but he’s a shadowy figure. Black Hawk is the villain we see most of and he’s more than just a crack pilot - he’s the commander of the air forces of the Black Invaders and clearly is very high up in the Black Invaders hierarchy. It’s interesting that despite the central Asian origins of his barbarian horde the author is not very interested in the race issue. In fact it’s hardly mentioned. The villainy of the Black Invaders seems to be mainly due to the fact that they’re not American and they don’t believe in democracy. In fact the author may have been more intent on telling a Red Peril tale (the evils of Bolshevism) rather than a Yellow Peril tale.

Having said all that you’ll be relieved to know that the book still manages to be fairly politically incorrect.

Dusty Ayres is initially a solitary hero but Black Lightning introduces a figure who will apparently be a crucial ally to him in subsequent instalments.

The style is exactly what you expect from the pulps, full of breathless excitement and generously laced with action and thrills.

If air combat adventure combined with weird fiction and/or science fiction elements is a cocktail that appeals to you then the pulp writer you need to seek out is Donald E. Keyhoe (Strange War, the Richard Knight stories, etc). He did that sort of thing better than anyone. But Black Lightning is still a good deal of fun and the Dusty Ayres series seems to have definite promise. Recommended.
Posted by dfordoom at 12:33 AM