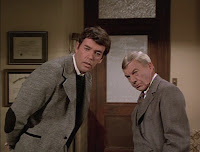 The 1975-76 Ellery Queen series, which starred Jim Hutton as Ellery and David Wayne as his father Inspector Richard Queen, was for my money one of the best ever television series based on the works of the masters of the golden age of detective fiction.

I’ve recently rewatched a few episodes and my thoughts on these can be found on my Cult TV Lounge blog. Here’s the link to my reviews of three classic episodes.
Posted by dfordoom at 5:57 PM