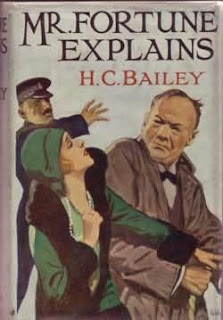 Mr Fortune Explains is a 1930 short story collection from the pen of H.C. Bailey and featuring Reginald Fortune, a kind of scientific and medical advisor to Scotland Yard.

The Reggie Fortune stories were immensely popular in their day and have since fallen into almost total obscurity.

These stories are very entertaining and Reggie Fortune is an amusing and rather likeable eccentric genius detective.

The weakness of these stories is that they’re not remotely fair play. Most of Mr Fortune’s cases seem trivial and routine at first and the authorities are usually all that interested. Reggie Fortune however knows that the cases are not straightforward at all. Terrible crimes are being committed (or at least planned) and no-one would care or even suspect were it not for the fact that Mr Fortune has seized on some vital piece of evidence that leads to the uncovering of a frightful conspiracy.

It’s not a bad formula but the problem is that it relies entirely on some extraordinary leap of intuition on the part of Mr Fortune. Even when the solution is explained the chain of reasoning that led Reggie Fortune to the explanation of the puzzle is just not there. We’re left to believe that he must have relied on divine inspiration or that he has some supernatural or paranormal powers of perception that are denied to mere mortals, such as the readers of these tales.

The first story in this collection, The Picnic, is a good example. The brother of a nobleman is the victim of a violent assault. From this Mr Fortune is not only able to deduce the existence of a conspiracy to kidnap a young heir but can fill in just about all the details of the elaborate plot.

The second story, The Little Milliner, involves a missing shop girl. She has most likely run off with a gentleman. What little evidence there is points in that direction. Mr Fortune however knows that the young shop girl has been the victim of a terrible conspiracy. The shop girl’s story is clever enough but again Mr Fortune appears to solve the puzzle by means of lucky guesswork or pure intuition.

The Wedding Ring is delightfully convoluted. There’s a doctor who needs to consult Mr Fortune urgently but the doctor disappears. Later his wife disappears. Someone tries to murder Reggie Fortune. It may have something to do with industrial espionage. There are all sorts of people who aren’t what they seem to be. It’s all thoroughly enjoyable.

In The Football Photograph Reggie is involved in investigating a smash-and-grab raid on a jewellery store. This is nicely complicated police procedural sort of stuff with some obscure but amusing clues. This is also Reggie Fortune at his most devious, laying an elaborate and clever trap for a murderer. An excellent story.

The Rock Garden takes Mr Fortune into the countryside. He’s been invited to see the rock garden belonging to a Mr Briggs and he’s fairly confident that Briggs does not possess a rock garden. This interests Mr Fortune enough to convince him to accept the invitation. It turns out there are other mysteries besides the rick garden, like the missing window in the library, and those rapping sounds that only Briggs seems to hear. This is a nice little mystery with its roots in the distant past.

The Silver Cross is a clue in what seems like a fairly trivial robbery. The chief suspect is a man of the cloth but the silver cross is not a Christian cross even though it implicates the clergyman. The problem with the cross as Reggie Fortune sees it is that it makes the police case both too easy and too difficult. He’s very unhappy about it. The clergyman meanwhile is causing all sorts of difficulties - he is obviously hiding something but he is a remarkably stubborn man. There’s also the question of the local squire’s extraordinary hostility to the Reverend Neath, and the squire’s daughter’s odd behaviour. Not to mention some worrying medical evidence. This tale is a fine example of Reggie Fortune’s ability to turn a very minor case into a very major case by continually worrying about a problem. Another good story.

In The Bicycle Lamp a village policeman is knocked down by a car and killed. A tragic accident but the police doctor is perfectly satisfied as is the Chief Constable. And that’s where the matter would have rested had it not been for the fact that Mr Fortune and his friend Mr Justice Platt not been the first on the scene. To Reggie the evidence is quite satisfactory except that it’s obvious that no such accident occurred at the spot where the body was found. Reggie is accused of theorising and he is most indignant, insisting that he is merely following where the evidence leads. The trouble is that sometimes the evidence leads to unpleasant conclusions. In this case Mr Fortune has to deal with the official mind and the official mind in this case seems to be either notably lacking in zeal or infected with disturbingly excessive zeal. It’s a case that just gets out of control.

Bailey often seems like an author with more interest in the moral side of crime than in the simple solving of puzzles. Mr Fortune is by and large a loyal servant of the inexorable forces of law and order but it’s something that on occasions causes him a good deal of distress. The law can be a distressingly blunt instrument.

The Face in the Picture takes Bailey’s method to an extreme. Reggie Fortune is in Paris and sees two paintings at the Salon, both by the same artist. There’s something very wrong with one of the paintings. Or perhaps it’s the other painting that’s wrong. Or perhaps they’re both wrong. One thing Mr Fortune is sure of - there’s definite wrongness here. It is fortunate that his friend M. Dubois of the Sûreté is used to Reggie’s instincts. And of course once it becomes obvious that there’s a lady involved, then M. Dubois is most anxious to help. A crime has been committed, although the nature of the crime is by no means obvious. The extraordinary thinness of the clue (if you could even go so far as to call it a clue) that puts Reggie on the trail of a desperate criminal should be a fatal weakness but Bailey, like Reggie Fortune, has such boundless confidence in his instincts that he just about makes this story work. Not quite, but one still has to admire the daring of the attempt.

Some readers will be entranced by both Mr Fortune himself and the stories in this collection. Others will be exasperated. Personally I find both the stories and Reggie both entrancing and exasperating in equal measure but at least they’re never dull. Mr Fortune is an acquired taste but be warned - he can be addictive. Mr Fortune Explains is recommended.
Posted by dfordoom at 7:02 AM