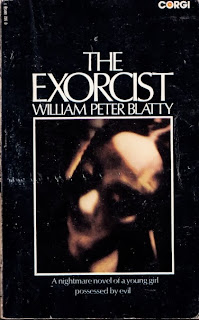 Whether The Exorcist is actually a horror novel or not is a point open to debate. The novel was intended more as a novel about faith than as a horror story, a point that was lost to a considerable extent in the movie.

On the surface The Exorcist is about a 12-year-old girl named Regan McNeill who may or may not be the victim of demonic possession. In fact Regan is not the focus of the book at all. The real central character is a Catholic priest, Father Damien Karras. Karras is also a psychiatrist. And he is also, by birth, a Jew. Karras has to a very large extent lost his faith. He has not entirely succumbed to despair but he can feel himself heading that way. He feels lost, and also useless. His job is to counsel priests but how can he do that if he himself no longer believes?

Then odd things begin to happen. Regan complains of a strange burning smell in her bedroom, and claims to hear rapping sounds. This is not too disturbing but things will soon get much worse. Regan’s behaviour starts to change. The changes become progressively more unsettling and the odd unexplained events become more frequent and more worrying.

The doctors are perplexed by Regan’s case. They can think of any number of physical ailments that might explain her condition but every test they run to try to confirm a diagnosis comes out negative. Eventually one doctor, as a last resort, suggests that this might be a case of demonic possession and that an exorcism might be the answer. He makes it clear that he does not actually believe in either demonic possession or exorcism, but his view is that Regan may well believe she is possessed and that an exorcism might convince her that she is cured. He happens to know a Jesuit priest who is also a psychiatrist who might be just the man to deal with such a puzzling case.

The Jesuit priest is Father Damien Karras. We have already been following his story which has been running through the novel in parallel to Regan’s story.

Despite being a priest Karras also does not actually believe in either demonic possession or exorcism. He is a rationalist. That is why he has lost his faith. He demands rational scientific proof of God’s existence, and not having found this his faith has been gradually ebbing away. Although he has serious doubts about his ability to help anybody he is persuaded to take on Regan’s case.

There is a major complication. Chris’s friend, movie director Burke Dennings, has been found dead at the bottom of a steep flight of steps next to Chris McNeill’s house. Detective-Lieutenant William Kinderman is not happy about what initially appeared to be a case of accidental death. It is Karras’s fears as to what might really have happened to Dennings that convinces him to take on Regan’s case.

We have now come to the core of the book. Karras knows that the Church hierarchy will not sanction an exorcism unless there is clear evidence that demonic possession is the only possible explanation for Regan’s condition. Karras begins a painstaking process of reviewing the medical evidence and interviewing both Regan and the demon that has supposedly possessed her, looking for anything that would point in absolutely unequivocal fashion to possession. He finds plenty, but every time he finds one such indication he finds another indication that seems to point just as unequivocally in the other direction. Despite his exhausting labours the case still seems ambiguous and Karras remains hesitant about exorcism. Eventually his hand will be forced but it is only at the very end that Karras will find that he was seeking, although not in the way that he expected.

The real point of the book is that Karras slowly starts to accept the idea of demonic possession his faith slowly revives. If there really is such a thing as transcendent evil then, as he sees it, there must also be transcendent good. If the Devil exists, God must also exist. While to some people the existence of evil is an obstacle to faith, to Karras it is an aid to faith. It provides the certainty he has been so desperately seeking.

Karras’s reasoning might not appeal to every reader but there is a certain logic to it. It might even be, in some cases, a partial explanation for the popularity of the occult and even of horror fiction in a largely secular world. Evil can give a certain meaning to a world that otherwise seems meaningless, and (following Karras’s and presumably Blatty’s reasoning) absolute evil can be seen as to a certain extent implying the existence of absolute good. Not every reader is going to agree with Blatty’s logic but if you hope to appreciate his novel it is necessary to understand where he’s coming from.

Given that Blatty was actually more interested in Father Karras’s spiritual struggles than in telling a straightforward horror story the obvious question is - does The Exorcist actually work as a horror novel? I think it does, although it works in a way that does not particularly appeal to me. The descriptions of Regan’s sufferings are confronting, graphic and genuinely shocking. And at times deeply disgusting. This novel upped the ante in horror fiction to a spectacular degree. It ushered in the era of modern horror with its increasing reliance on grossing out the reader.

Whatever one’s personal feelings about this very visceral approach to horror it cannot be denied that The Exorcist packs a major punch. More than forty years after its publication it has not lost its power to shock. The fact that Blatty had a reason for using this approach, other than a mere desire to shock, gives the book a power that is lacking in many modern novels that are superficially more extreme.

It’s worth pointing out that there are a number of differences, mostly of emphasis, that make the novel considerably more effective than the movie.

It’s also worth remembering that the novel was intended by its author to be essentially optimistic.

Whether you take it as a horror novel or as a serious novel about belief The Exorcist is not easily forgotten.
Posted by dfordoom at 1:57 AM

Email ThisBlogThis!Share to TwitterShare to FacebookShare to Pinterest
Labels: 1970s, B, horror