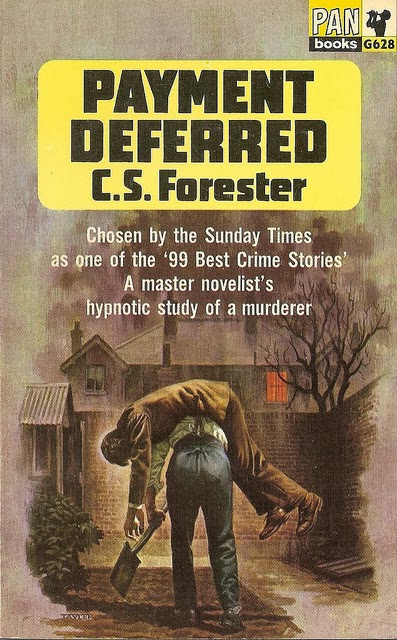 C. S. Forester (1899-1966) gained fame as the author of the Hornblower naval adventure novels. He wrote two crime novels, the first being Payment Deferred in 1926.

R. Austin Freeman had invented the “inverted” detective story prior to the First World War. The idea was that the identity of the murderer was revealed at the beginning of the book, the rest of the book being devoted to showing how the murderer was unmasked and brought to justice. In the early 1930s Anthony Berkeley Cox, writing under the pen-name Francis Iles, attracted a great deal of praise by adding a strong psychological dimension to the inverted detective story. In Malice Aforethought in 1931 and Before the Fact the following year the emphasis is almost entirely on the psychology of the murderer and it is the murderer’s psychological flaws that are his undoing. There are no detectives and no actual process of detection at all.

In fact C. S. Forester had beaten Iles to the punch by five years with Payment Deferred. In this novel every element that critics praise in Iles’ work is already in place. And like Iles’ novels Payment Deferred is liberally laced with wry black comedy.

Will Marble is a middle-aged bank clerk. He is married with two children and lives in a very modest suburban house. Mr Marble has a problem. He is chronically unable to live within his income. He is inclined to blame his wife’s extravagance for his financial problems although he also, somewhat unwillingly, admits that his own irresponsibility is at least as much to blame. The situation has become so serious that Mr Marble can see no way out. Not only is there no possibility of clearing his debts; when his inability to pay those debts can be concealed no longer dismissal from his position at the bank is a certainty. He knows he has little chance of getting another job. And the crisis in his affairs is likely to occur very soon.

Then a way out unexpectedly presents itself. It will involve murder, but as luck would have it the circumstances are such that it is virtually impossible that the crime could ever be brought home to Mr Marble. The perfect murder has been more or less dropped into his lap.

The murder is easily accomplished but of course there will eventually be a price to be paid. The payment may be deferred for a considerable length of time but it cannot be deferred indefinitely.

In an indirect manner the murder is responsible for offering Mr Marble another unexpected opportunity, an opportunity so golden that it appears to solve all of Mr Marble’s problems. Taking advantage of this opportunity will in fact, through some rather subtle ironic twists, cause Mr Marble more problems that it solves.

Forester was always capable of writing supremely entertaining prose and even in this early novel his writing already sparkles. The irony is there but Forester employs it like a rapier rather than a bludgeon. He also had a considerable gift for deft characterisation. Mr Marble, his wife Annie and his children John and Winnie are all fully fleshed-out characters.

Mr Marble is a weak and rather apathetic man capable at times of displaying startling strength of character and daring. At times he seems obtuse when it comes to understanding people, but at other times he has moments of penetrating insight. He is a lazy man who can, when the situation requires it, be forceful and decisive. The key to his character is that he is a man with considerable gifts but these gifts only come to the fore at moments of crisis. Had Mr Marble been able to stir his talents into action on a more regular  basis he could have avoided all his difficulties before they arose. He is a meek man but when cornered he fights desperately, and even skillfully, for survival.

Payment Deferred is a work considerable historical importance as far as crime fiction is concerned. It is also a brilliantly effective and very entertaining crime novel. Highly recommended.
Posted by dfordoom at 9:50 AM