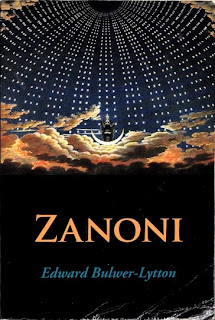 The English novelist Edward George Earle Lytton Bulwer-Lytton, 1st Baron Lytton (1803-1873), is today best-known for inspiring The Bulwer-Lytton Fiction Contest, a competition for the worst opening lines for the worst possible novels. This is a result of Bulwer-Lytton having opened one of his novels with, “It was a dark and stormy night.” This has gained him a reputation as a bad writer, a reputation that is most unjust. Bulwer-Lytton was in fact a fine and imaginative writer and one of the most interesting of all 19th century literary figures.

His short story The Haunted and the Haunters is one of the minor masterpieces of horror. Bulwer-Lytton wrote in many genres and was the author of the fascinating science fiction novel The Coming Race. He had a keen interest in the occult and it is one of his occult novels with which we are concerned - Zanoni, published in 1842. It is often described as his Rosicrucian novel, although in fact the two key figures in the book, Zanoni and Mejnour, are not Rosicrucians but members of a much more ancient and much more secret fraternity. They do however acknowledge the Rosicrucians as being on the right track. The alchemists they regard as sincere seekers after truth and wisdom, and often men of genius, but alchemy is not the path to the truths they seek.

This is a novel within a novel. The author claims to have come into possession of a manuscript, a manuscript written by an adept in the occult arts. He claims to have obtained the manuscript from its author, who claimed that it dealt with an idea derived from Plato, that there are four types of enthusiasm or mania. Mania is used here in a positive sense, as a kind of spiritual exaltation. The four manias are the musical, the mystical, the prophetic and that that pertains to love.

The manuscript describes events that supposedly took place at the end of the preceding century. The hero of the manuscript is Zanoni. Zanoni is one of two surviving members of a brotherhood that dates back almost as far as the beginnings of human civilisation. Zanoni appears to be a youngish man, but in fact his lifespan is measured not in mere centuries but in millennia. Majnour is even older. Zanoni and Majnour chose different kinds of immortality. Zanoni chose eternal youth while Mejnour chose eternal old age.

Mejnour is the more content of the two. The passions of youth are behind him. He is no longer prone to emotional entanglements or the snares of the passions. He regards humanity with the detachment of a scientist. He almost never seeks to intervene in human affairs. Zanoni on the other hand still knows the extremes of youth - the extremes of happiness and of despair.

Zanoni can even fall in love, but he knows that to do so would have momentous consequences. Nevertheless when he meets Viola, the daughter of a brilliant Italian composer, he finds that try as he might he cannot escape love.

Zanoni’s path will also cross that of Glyndon, a young English artist who becomes obsessed with the idea of following the path of Zanoni and achieving the powers and the wisdom of the brotherhood.

This is most emphatically not a novel that treats the occult as something evil. The occult in this novel is rather a seeking for wisdom. On the very rare occasions on which Mejnour does interfere in the affairs of humanity it is always on the side of good. Zanoni frequently intervenes in human affairs, and again always on the side of good. Which is not to say that evil does not exist. It is a hazard even for the greatest of adepts, and among the common run of humanity it is all too common. The evils in this book are all very human evils.

Zanoni can also be seen as a novel of the French Revolution but to see it that way is to miss the point. The French Revolution merely represents the absolute nadir of humanity, an event so cataclysmically evil that it is capable of having an effect even on Zanoni. It represents (according to the author’s afterword) the violent eruption of the actual into the ideal. Zanoni represents the ideal. All the major characters will find themselves drawn by destiny to Paris during the Reign of Terror.

It is somewhat pointless to try to analyse this book in terms of plot and characterisation. On the surface it might seem to be an historical novel but actually it is a philosophical novel that makes few concessions to realism, realism being an artistic ideal that Bulwer-Lytton regarded with contempt.

In this novel Bulwer-Lytton works out his rather eccentric but fascinating ideas on the occult. That might sound rather heavy but in fact it’s an entertaining novel that can be enjoyed as a kind of occult thriller. Bulwer-Lytton strongly believed that a novel must be entertaining first of all. If the author wishes to include multiple layers of meaning and hidden depths (and Zanoni includes those in abundance) then he is free to do so so long as it does not detract from the enjoyment of the story. It’s a surprisingly successful attempt to combine entertainment with esoteric occult speculation and it’s one of the most interesting of British 19th century novels.

There is a faint hint of decadence in the world-weariness of the novel’s immortals.

A strange but fascinating concoction and a must-read for anyone with an interest in the development of 19th century weird fiction, and a gripping occult thriller by an author with a considerable knowledge of the subject. Highly recommended.
Posted by dfordoom at 6:26 AM