A Master of Mysteries 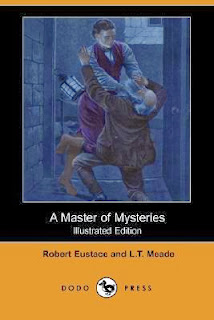 Elizabeth Thomasina Meade Smith (1844–1914) wrote under the name L. T. Meade, producing countless stories for girls. She also wrote in a variety of other genres, including mysteries and occult detective stories. Most of these were co-authored with Eustace Robert Barton (1854–1943) who wrote under the name Robert Eustace.

A Master of Mysteries, published in 1898, is one of their collections of what could be described as occult detective stories although in fact the hero of these stories, John Bell, is man who specialises in finding rational explanations for apparently occult or inexplicable events such as hauntings. The explanations usually involve a crime, and it is generally a strange and outlandish crime.

This slim volume comprises six stories. The first two stories, The Mystery of the Circular Chamber and The Warder of the Door, are relatively conventional stories of this type dealing with a haunted room in an old house and a family curse involving a door that must always be guarded. The explanations are rational enough although they are also pleasingly bizarre.

In The Mystery of the Felwyn Tunnel Bell must solve a series of unexplained deaths that have occurred near a railway tunnel. Murder is suspected and the police have a suspect but Bell is not so sure that these events are as clear-cut as they seem.

With The Eight-Mile Lock things get a lot stranger. Bell is fairly sure he knows who was responsible for the theft of a very valuable diamond necklace but he needs to discover how the theft was carried out. The methods turns out to be spectacularly bizarre. Like many of the stories of these authors, in this and other collections, the method involves technology that was very high-tech indeed in the 1890s. The authors were clearly fascinated by technology and gadgetry and this fascination is one of the greatest strengths of their stories. At times, as in the story, we are almost approaching what today would be described as steampunk.

The solution to the mystery of How Siva Spoke involves a delightfully outrageous piece of gadgetry, not perhaps high-tech but certainly incredibly ingenious. An eccentric elderly man who has embraced the religion of Brahminism is convinced that he is receiving messages from an idol of the god Siva. As a result of this he is about to be committed to an asylum. Bell has serious doubts as to whether the man is really mad, but at the same time the old gentleman is adamant that the idol really speaks to him. Bell fears that the consequences may be more serious than a committal to an asylum.

To Prove an Alibi also relies on a clever piece of gadgetry, in fact several pieces of gadgetry, and Bell is faced with a thrilling race against time to save the life of an old friend.

The stories are similar in tone to another excellent collection by these two authors, The Brotherhood of the Seven Kings, which recounts the crimes of the evil Madame Koluchy, one of fiction’s finest female diabolical criminal masterminds.

It’s the pseudoscientific gadgetry that is the great appeal of these stories and the authors certainly possessed fertile imaginations in this area. These are not stories to be taken too seriously but they are enormous fun and they do provide some genuine chills and thrills. A Master of Mysteries is delightful offbeat entertainment and is recommended.
Posted by dfordoom at 12:49 AM