The Corpse with the Grimy Glove (AKA More Than One Serpent) 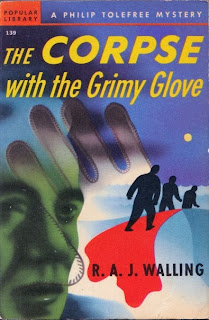 The Corpse with the Grimy Glove (that was the US title the original British title being More Than One Serpent)  was the thirteenth of R. A. J. Walling’s twenty-two mysteries featuring private detective Philip Tolefree. It appeared in 1938.

R. A. J. Walling (1869-1949) was born in Exeter in England and spent his professional life as a successful newspaperman. He took to writing late in life. His first novel was published in 1927 and the first of the Philip Tolefree mysteries appeared in 1932.

Tolefree is clearly a man of birth and education but he lacks the spectacular aristocratic pretensions of a Lord Peter Wimsey. He does however view the world with a slightly ironic eye. His methods are, on occasions, slightly unconventional. He has no animus against the police but he does sometimes neglect to tell them things when perhaps he should have done so. Tolefree however is no rebel. He believes implicitly in the law and in justice. He simply prefers to pursue his investigations entirely independently.

His Watson is a shipbroker named Farrar who narrates the novels. Like most Watsons Farrar is not unintelligent but he is generally quite unable to follow the workings of Tolefree’s mind once the latter is on the scent of a criminal.

Given that Walling spent his entire life in the West Country it’s no surprise that this detective novel takes that part of England as its setting, and uses that setting very effectively.

Tolefree has been invited to the ancient and rather impressive dwelling place of Sir James Lanivet. The baronet is a local figure of great importance in the small seaside town of Bossena. Almost everybody in the town, and in the surrounding area, is either a tenant of Lanivet’s or is in some way dependent on the family. This will prove to be a factor of major significance.

Sir James has another guest, and a rather surprising one, in the person of a City financier of evil reputation named Tenterton. Tenterton has been implicated in several financial scandals and is widely regarded as a swindler. The real surprise, to Tolefree’s way of thinking, is that Tenterton does not seem to be very happy to be in Bosenna and is not there entirely of his own free will. The reason that Tenterton does not wish to be there will prove to be the key to the unravelling of a murder that is about to take place.

The plot is interesting and ambitious involving, even by the standards of detective fiction, an extraordinary number of people with dark secrets and ambiguous motives. Not necessarily motives for murder, but motives for actions that have the effect of making the solution of the mystery more troublesome for Philip Tolefree.

The only other of Walling’s Tolefree novels that I’ve read is The Corpse in Green Pyjamas (British title The Cat and the Corpse). It was published in 1935 and had a somewhat whimsical feel, as if Walling was enjoying himself having a bit of a romp with mystery novel clichés. By comparison The Corpse with the Grimy Glove has a slightly darker tone although it’s not without its occasional lighter moments.

Interesting, both novels have moments that suggest that the author may well have had a fondness for gothic fiction.

Walling has an easy-going writing style which suits the easy-going personality of his hero quite well.

While I’ve described Tolefree as easy-going it should not be assumed that he is lacking in tenacity or willpower. He can be stubborn and he can be forceful when the occasion demands. An affable exterior is a useful asset for a detective.

Perhaps one can say much the same thing about Walling as a writer. His free and easy style belies the fact that he clearly took detective fiction quite seriously. Walling is a writer I could easily become very fond of. The Corpse with the Grimy Glove is thoroughly enjoyable. Recommended.
Posted by dfordoom at 8:12 AM