The Land of Ophir 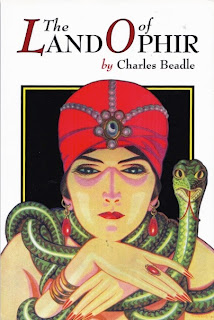 Charles Beadle’s The Land of Ophir was originally published as a three-part serial in Adventure magazine in 1922. The 2012 paperback edition from Off-Trail Publications represents its first appearance in book form.

Charles Beadle was born an Englishman in 1881, although he was actually born at sea. As a young man he travelled extensively in Africa and served in the Boer War. He contributed extensively to American pulp magazines. His date of death is unknown.

The Land of Ophir is a lost world tale, a type of story to which I am extremely partial. Philip Tromp (a descendant of the Dutch admiral who famously tied a broom to his masthead to signify his intention to sweep the English out of the English Channel and then proceeded to do just that) is an adventurer at a loose end. He meets an old school friend named Thorpe in a bar in Africa.

A couple of years earlier Tromp had saved an African girl from a beating at the hands of a man of indeterminate race named Gandy. That encounter will later have fateful consequences.

Some time later Tromp comes across a journal written by Thorpe, who has now disappeared. The journal recounts the story of Thorpe’s final expedition.

A penniless Irish viscount named Fieldmorre is putting together an expedition to find Thorpe’s lost civilisation. His partner is an American, Billy Langster, another old Africa hand. It doesn’t take much to convince Tromp to join them. Also taking part are a Frenchman of questionable motives named Vèron and a Syrian known as Sabah.

The expedition is a big one, including a couple of hundred Hausa tribesmen whose loyalty is unquestioned (at least at the start of the journey). The expedition soon runs into trouble, and the troubles continue to mount. Both camels and men are poisoned. They are almost wiped out by a huge band of Tuaregs. They are plagued by sickness. To cap it all off they start losing more men, killed by darts. The darts are of a type seen only in Borneo, adding mystery to their already full load of misery. And then their Hausa warriors start to desert.

Despite all these setbacks they do of course find the lost civilisation and the lost city. But what kind of civilisation is it, and how could could such a city be found so far south in Africa? And what is the full significance of the worship of the snakes?

This is a very short novel at just 58,000 words but it packs a great deal of plot into its short length. There is as much action as anyone could reasonably ask for, including at least one full-scale battle. There is treachery, and there is revenge. There are links to biblical history, and to pre-biblical history.

Beadle was able to draw on his experiences in Africa for the background to this story giving it a fairly authentic feel. His style is extremely pulpy, which is no bad thing in this type of story, and more importantly the writing has energy and a certain flair to it. Beadle creates some colourful characters and his plotting is sound. This is a story that moves along at a very healthy pace.

If you enjoy lost world stories and two-fisted action adventure tales then you should find that The Land of Ophir ticks all the requisite boxes. Highly recommended.
Posted by dfordoom at 9:21 AM